Cork camogie star Gemma O’Connor will play for one more season, she confirmed after picking up the Player of the Year award on Saturday night.

The brilliant defender has won seven All-Ireland titles and is hoping to add an eighth next September before finally hanging up her boots following an incredible career.

“My thoughts on things are, you take every game as it comes, every year as it comes and every year is different,” said the army corporal.

“I started in 2002, we’re now in 2015 and the years in between have been heartbreaking, joyous and everything in between.

“The fact is now I have so many All-Irelands and so many All Stars and they’re all bonuses.

“You ask yourself time and again ‘when are you going to give up?’. I came up with the answer that I will give it one more year and that will definitely be it.

“I look at Jenny O’Leary, who has gone and what a player and what an athlete,” said O’Connor of her long-time team mate who recently announced her retirement from inter-county camogie.

“I aspire to Jenny O’Leary. She is a fantastic player and athlete and what a humble person she is. If I could be like Jenny, I have all the boxes ticked.

“For me it’s important to realise the stopping point, and of course we all want to go out on a high.

“That’s what I want to next year; I want to go out on a high, but if it doesn’t work out, so be it. I don’t want to be one of those players who just straggles along – I want to finish when I’m fit and capable,” she said, speaking in an interview with RTE Radio 1's Sunday Sport.

Despite winning another All-Ireland this was one of the toughest seasons O’Connor has had to endure.

After winning the final she gave an emotional on-field interview about her mother Geraldine, who was at the time receiving cancer treatment and who has since died.

“My Mam was diagnosed just over 12 months ago and so many people are touched by this disease,” she explained.

“You don’t know anything else only having her alongside you. I would not be here today only for her. She was an amazing person and her heart is what drove me on.”

O’Connor was named Player of the Year following a ballot of inter-county players across the country and she was blown away to receive the prize.

“Playing for so long, you try to not think about that because you go out to try to win at all costs, but when you play against someone so long you always think in the back of your head ‘what does that player think about me?’.

“To get that award is incredibly humbling and I can’t really describe it – it’s the best award to get. The best accolade to get is from your peers.” 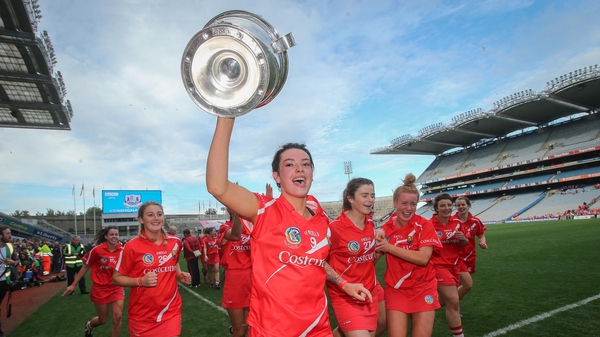