It was considered improbable by most observers at the beginning of the season but champions Cork made it two Liberty Insurance All-Ireland senior camogie titles in a row with a resolutely professional performance at Croke Park.

Having lost 13 players from the panel that scaled the summit 12 months ago, nobody gave them a prayer of making a return.

Only managing to emerge from their group in third place after defeats to Wexford and Galway, who had also accounted for them in the league decider, seemed to confirm that notion but not for the first time, they showed their mettle once it came to the knockout stages.

Briege Corkery settled the game with a 54th minute goal and brought her individual tally of All-Ireland senior medals to 15, six of which have come in camogie. That record is matched by team-mate Rena Buckley and the pair will be pursuing number 16 in the ladies football final in two weeks.

Cork also move joint top of camogie’s championship roll of honour, with this victory bringing them alongside Dublin on 26 titles.

The Leesiders produced a wonderfully committed performance, with a number of standout showings.

Gemma O’Connor and Orla Cotter were the real stars though, while Laura Treacy and team captain, Ashling Thompson produced wonderful displays too.

“Unless you break your legs, you have to keep going” she smiled.

“This is what we came here to do. Every team gets a purple patch and we said that at half time. It was nil-nil again. Some people don’t even know the score. We never take any notice.

“We never threw in the towel and that’s the difference between Cork camogie and anyone else. When the going gets tough, who’s going to throw the towel in first and that certainly wasn’t us so we got the result we wanted today.”

Cork dominated the first half completely and should have led by more than four points (0-08 to 0-04) at the change of ends. .

Galway certainly seemed off the pace slightly in the first half as O’Connor hoovered up possession effortlessly, while Cotter came up with some big plays. Had they offloaded a little earlier having created a number of overlaps, they might have put Galway away.

Thompson got the champions off the mark with an early point and Cotter notched up the first three of seven points, with Niamh McGrath landing a brilliant equaliser from the left wing from Galway.

That was to be the Tribeswomen’s only score from play until Aoife Donohue struck and they never carried a sufficient offensive threat.

McGrath, who scored all bar that Donohue point for Galway, kept Tony Ward’s team in touch but with Cotter and Corkery doing the business at the other end, it was double scores at the break.

Galway thundered into the fray after the resumption though and three pointed frees McGrath, including one from just short of the 65m line, reduced the margin to one.

The challengers were in full flow now with Lorraine Ryan in no mood to yield, while Heather Cooney made a stunning block to deny a certain goal.

Julia White also had a goal correctly ruled out for a square ball but Cotter came up with a big point from play to stop the rot and Cork never really looked back.

Once Corkery intercepted Shauna Healy’s attempted clearance and raced through to slot calmly to the Galway net, Cork opened their shoulders and Thompson landed a monstrous score late on, followed by a Katrina Mackey point to signal the start of the celebrations.

“We love being the underdog” said Thompson.

We should all really know better. 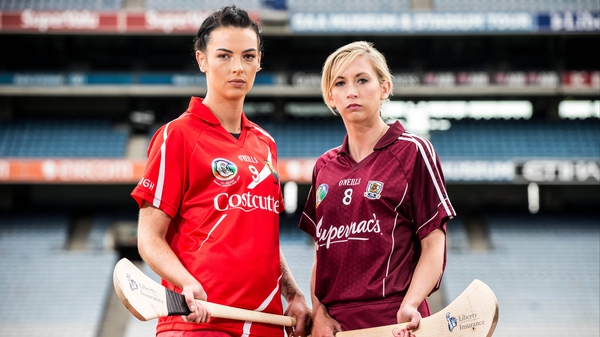