Jackie Tyrrell has revealed he didn’t plan the half-time speech that inspired the Kilkenny players to fight back and claim another All-Ireland title against Galway.

Much has been made of Tyrell’s half-time address by his Kilkenny team-mates, with many players describing it as the catalyst to the county’s 36th title.

Forward Eoin Larkin was one of the Kilkenny stars to credit Tyrrell for his words at the break.

Larkin told RTÉ this morning: “I think this man beside me had a lot to do with it at half-time. He gave a great inspirational speech at half-time and I think Brian summed it up when he said that is what the whole Kilkenny panel is about.”

Tyrrell, who claimed his ninth All-Ireland medal yesterday, disclosed how Brian Cody left the players to discuss their outlook for the remaining 35 minutes and immediately the defender demanded a different approach from his colleagues.

Tyrrell explained: “I didn’t plan on talking but Brian [Cody] said if you have something to contribute to the team, contribute, and I just felt things were a little bit dead.

“We were very relaxed and we were almost accepting what was going on. I just spoke from the heart. What an opportunity the lads had. We were two points down and we had not really hurled. I just started talking and luck enough the lads reacted. It is one thing talking. It’s another thing going out to do it. In fairness to the lads and the two Powers that came on, they all responded.

“They upped their games 10-15% and you could see the difference in the second half with the work-rate and scores created. The whole demeanour and body language was completely different. That is testament to the guys. I just had a few words and the lads went out and did it.

“We came into the dressing room and sat down. Brian had said a few words and went off with the management team. They do that, go off for a little huddle and have a little bit of a chat. He very much leaves it up to the players and it’s up to the players to drive it on then. I just felt it needed something to drive it home to the lads. I tried to be real and speak from the heart with passion.”

Tyrrell was named in the matchday panel despite suffering a stress fracture in his foot in July. He said he was determined to make his mark.

Some feeling winning my 9th medal, and my first for the screw 🔩🔩 pic.twitter.com/WRN8e9k2Q2

“Larks got an injury and straight away his attitude was ‘I don’t care, I’m playing’. Whether it was an injection or a glove or whatever it was, that is just the attitude that seeps down throughout the panel.”

Larkin, meanwhile, will spend the winter in Syria on peacekeeping duty as part of his job with the Irish army.

He said it will be "different to most years" in how he spends the time in the aftermath of winning an All-Ireland medal.

“It is something that I have to do, it’s part of my job,” he admitted. 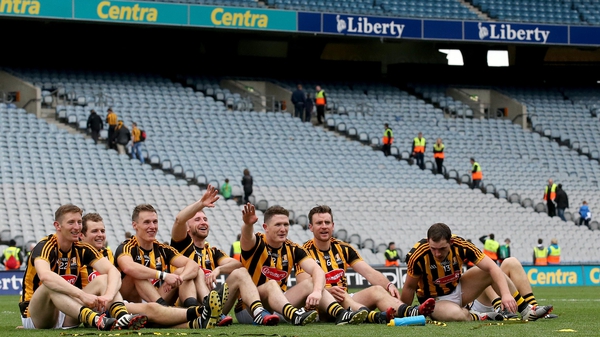