A goal from Danny Cummins eight minutes from the end sealed a deserved victory for Galway in difficult conditions at Pearse Stadium.

Derry were in a strong position when they trailed by just 0-08 to 0-05 at the break after playing against the strong wind, and they cut the gap to a point seven minutes after the restart.

But Derry fell away after that and did not score again until stoppage as Galway took over throughout the field and Cummins sealed it when he finished a good passing movement to the net.

Afterwards, Derry manager Brian McIver announced he was stepping down after three years in charge.

His side looked good for their first ever championship win over Galway when they raced into a three points lead after nine minutes despite playing against the strong wind.

But once Fiontan O Curraoin and Tom Flynn got on top in midfield, helped by a strong half-back line of Liam Silke, Gary O’Donnell and Gareth Bradshaw, Galway took control.

They made the most of Derry’s constant fouling and Gary Sice, with five, and a couple from Paul Conroy saw the Tribesmen hit seven frees in a row.

Derry also lost Brendan Rogers to a harsh black card but they were given a boost before the break when Heavron and Heron pointed.

Galway led by 0-08 to 0-05 at the interval when Bradshaw went forward in stoppage time to shoot their first point from play.

Derry trimmed the lead to just a point within seven minutes of the restart with efforts from Heavron and Cailean O’Boyle but, amazingly, they did not score again until stoppage time despite having the strong wind at their backs.

Sice pointed for Galway and then set up O’Donnell to put four between them ten minutes from the end.

They sealed the issue seven minutes from the end. O’Boyle’s claims for a penalty were turned down and Galway countered with seven passes which finished with Silke returning the ball to Cummins and his seventh championship goal wrapped it up for the Tribesmen. 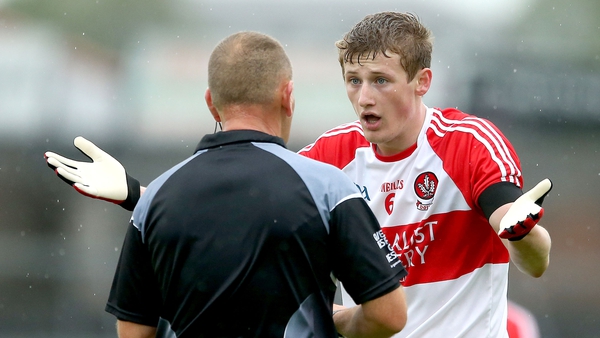