By Orla Bannon at Healy Park

Conor McAliskey top-scored with six points as Tyrone struggled to shake off the cobwebs after a six-week lay-off.

The game failed to catch fire in front of 5,225 spectators, most of whom had turned up expecting to see Tyrone coast through to the next round.

The Red Hands were nowhere near the level they displayed against Donegal in the Ulster championship last month, but did score the opening three points after 11 minutes.

Mattie Donnelly stroked over a long-range opening minute point while Sean Cavanagh (free) and a Conor McAliskey point put the home side seemingly in control.

McAliskey was involved at both ends of the field, drilling a shot wide of the near post and then making a superb interception at the other end after his marker, cornerback Robert Browne, made a run in behind the Tyrone defence and threatened to score a goal of his own.

Midfielder Gearoid Hegarty scored Limerick's first point after 15 minutes but by that stage, the visitors suffered their first black card dismissal after Cillian Fahy was sent off after six minutes.

Darragh Treacy also got a black card before half time.

Tyrone had a goal disallowed in the 17th minute when over-elaboration led to Cathal McCarron being blown for a square ball.

Peter Harte made a strong run through the middle and laid the ball off to McAliskey. He lobbed it back across to McCarron who was already in the square.

Limerick dangerman Ian Ryan scored his first from a tight angle and Browne's free brought the visitors back to within a point.

Darren McCurry nailed a free before being substituted and although Limerick goalkeeper Brian Scanlon used the wind to nail a '45', McAliskey chipped over a nice point on the run to make it 0-6 to 0-4 at the interval.

Tyrone made a couple of switches at half time with Mattie Donnelly moving to full-forward as the rain began to pour down.

McAliskey's free was quickly cancelled out by Cian Sheehan's point before a classy point from Ronan O'Neill put Tyrone three points up.

Tyrone's half-forward line malfunctioned in the first half but suddenly a few scores came from this sector, with Tiernan McCann following O'Neill in raising a white flag.

Sub Mark Bradley scored from a tight angle and Tyrone were 0-10 to 0-5 ahead having scored four of the first five points in the second period by the 45th minute.

Ian Ryan missed a free that Limerick badly needed to get back in the game.

They almost grabbed a goal when another Ryan free came off the upright, but Gearoid Hegarty's fisted effort hit the side netting.

Sean Cavanagh landed the best point of the day four minutes from the end to give Tyrone a 21st win out of 26 qualifiers played since the format was introduced in 2001. 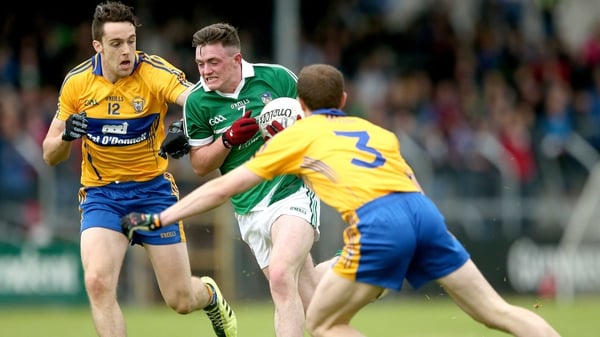