By Kevin Egan at Gaelic Grounds

The introduction of Conor Grimes off the bench proved to be a match winning switch for Louth manager Colin Kelly as the big full forward rattled a crucial goal and added a further point to help the Wee County to a win over Leitrim in their All-Ireland Round 1B Qualifier at the Gaelic Grounds in Drogheda.

An open and entertaining first half ended with Louth 0-11 to 0-08 to the good, but a few rain showers during and after half time brought about a series of sloppy handling errors and the contest deteriorated sharply as a result.

Louth’s lead was pushed out to seven points when Grimes goaled in the 48th minute and it was plane sailing for the hosts from there.

Both of these sides will ply their trade in division four next season and both came into the qualifiers on the back of comprehensive defeats in their solitary championship outing so far this season, and they looked quite well matched for the opening thirty five minutes.

Louth found their frees a little bit easier to come by, though there could be no arguing with the smooth and clinical striking of James Califf from those dead balls, while Leitrim were led by the hugely impressive Fergal Clancy, who kicked four points from play into a tricky diagonal breeze.

Louth had far more balance in their attack with five different forwards getting on the scoresheet from play, including wing forward Bevan Duffy who put in an impressive performance dropping deep to link up the play and add extra numbers in the back line.

Ronan Holcroft was one of five new introductions to the side from the team that lost to Westmeath and his movement across the full-forward line was also a real headache for Leitrim – three points from play came from the St Feichin’s player during the tie. 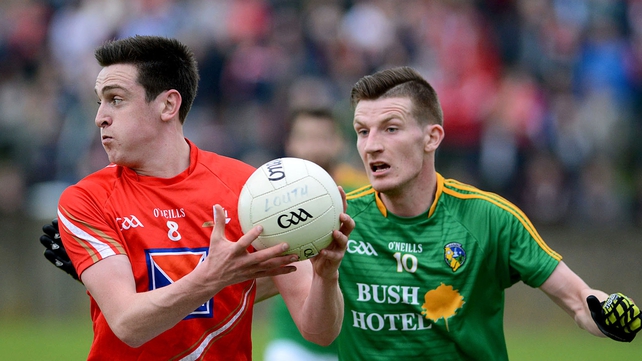 Neither side got too much satisfaction with long balls into the full-forward line as Colm Judge and Ryan Burns were turned over all too frequently by the Leitrim defenders, while Donal Wrynn never got into the game in his role as a target man on the edge of the square.

Louth looked good carrying the ball forward, however, and just about deserved their 0-11 to 0-08 half-time lead, even if it did look like they’d need every point with the wind set to blow into their faces in the second half.

Instead, the weather Gods smiled on the Wee County as a series of rain showers descended upon the Drogheda venue, nullifying the wind and also cutting the scoring rate dramatically.

Louth scored the odd point in three at the start of the second half but those scores preceded almost ten scoreless minutes of action.

Louth boss Kelly's withdrawal of Ryan Burns in favour of fellow under-21 Conor Grimes proved to be a masterstroke as the blonde behemoth collected a low delivery from the right wing, burst through a tackle and blasted the ball underneath Cathal McCrann into the corner of the net with his right foot.

It was the game’s only meaningful goal chance and it left Leitrim with a mountain to climb, one that proved to be insurmountable.

Grimes followed up that score with a wonderful left-footed point, proving he could step off the tackler and pick his spot as well as using his power to bulldoze through the back line, and that was to be the last of the meaningful action as the two teams added ten wides and just a solitary score between them in the last eighteen minutes of play.