Galway defender Finian Hanley is relishing the prospect of a Connacht semi-final against Mayo, who he described as one of "the big three" sides in Gaelic football at the moment.

The Tribesmen were eight-point winners over Leitrim on Sunday, which set up the last-four date with Mayo, who are aiming for a record-equalling fifth provincial title in a row this season, on 14 June.

"They've been at the top for the last four or five years, in Connacht and in Ireland," Hanley told RTÉ Sport. "They've been up there with the Kerrys, Dublins and Donegals.

"We know what's facing us. It's in Pearse stadium, which hopefully will help, but we've a lot of work to do in the next four weeks to bring it on and get up to their level.

The Salthill-Knocknacarra man admits that Mayo will be favourites but he believes that a solid league campaign - Galway won four of seven games in Division 2 and narrowly missed out on promotion - will stand them in good stead.

"Yes [they will be favourites], and rightly so," he said. "They're the team that's been on top for the last four or five years.

"But at the start of this year we set out that in every game we'd be competitive.

"We lost some in the league but we were still very competitive, we only lost by one or two points in most of the games. Whether we win or lose we want to be in the game right to the end.

"That'll be the plan in four weeks' time and hopefully that'll be enough to rattle them."

Hanley admitted Galway didn't hit top form in the victory over Leitrim but said they had fully expected to be tested by the underdogs.

"We knew coming down to Carrick that it's never easy. It never has been for Galway," he said.

"The last time we came down here it was very difficult as well. We got out by three or four points but we had to be up for the game.

"And we were well up for the game today, well prepared and well drilled.

"Leitrim brought that intensity to us in the first half and we had to try and match it. We did let them back into it before half-time but again we pulled away in the second half.

"Conditions were tough out there. It was quite greasy and there was a lot of dropped ball.

"It wasn't that pretty but any day you come down to Carrick and get a result you're happy so we're moving on to the next round.

"I don't think it was one for the spectators. They won't be going home too happy with the standard of the football but we're happy to be in the Connacht semi-final.

"That was the aim and we get a chance now to play one of the big three in four weeks' time." 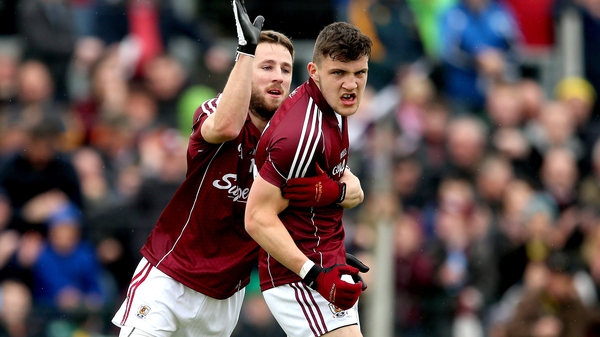 Leitrim prove no match for Galway