A proposal to limit the number of players between the 45s for a kick-out has been described as “very interesting” by the chairman of the Standing Committee on Playing Rules, Jarlath Burns.

RTÉ GAA analyst Joe Brolly has suggested that only four players may stand between the two 45 metre lines for a goalkeepers’ kick-out.

All others must stay out of that zone and would not be allowed to play the ball until it is played by one of the four nominal midfielders, the 1993 All-Ireland winner said.

The idea is to counter the scourge of the blanket defence, which has been a prominent feature of modern-day football.

Speaking to RTÉ Sport on Monday, Brolly explained: “Players are sick of blanket defences. I was down watching Dungiven and Coleraine [in a Derry club game].

“It was 0-09 to 1-6 and it’d be very typical, 10 minutes to go and it was a draw. I was chatting to the referee afterwards and he said, ‘that’s typical, Joe’. Teams are happy not to lose rather than to go out and win. This is sweeping underage level as well.”

The Derry man added that the rule would need to be tested before implementation but that was not an obstacle.

"Everybody’s saying ‘Jesus Christ Almighty’, I just can’t stomach any more of this"

“A bit of trialling is obviously essential,” he said.

“There is no downside to this. People say that a keeper can’t kick a ball that far. Anyone can kick a ball [32 metres].

“You are not going to get a voluntary return to Gaelic football so it’s time to make a rule. And this rule is the least artificial.

“If you could get, for example DCU, where they’ve a bit of time on their hands and UUJ, the universities, you could get it trialled out, get a real look at it, get the stop-clock on, get an inter-county ref there. This is something that’s urgently required.

“Everybody loves Gaelic football but everybody’s saying ‘Jesus Christ Almighty', I just can’t stomach any more of this'.

“It makes the blanket defence virtually impossible to set up from the kick-out. The playing rules are no longer fit for purpose.

“The beauty of this is that it promotes high catching and it promotes the primacy of skills.”

Reacting to the proposal, Burns, chairman of the committee tasked with improving the game as a spectacle, told RTÉ Sport that Brolly’s comments were “certainly very interesting and we’ll take them on board.” 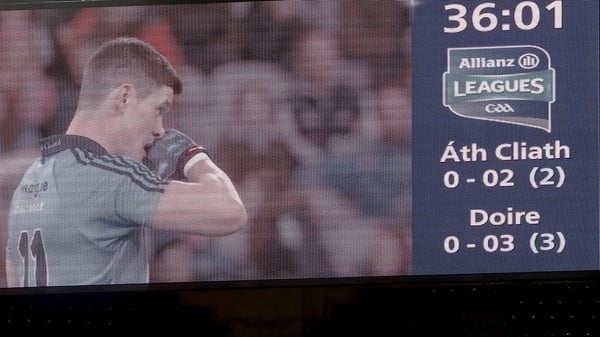