Jim McGuinness believes the pain of losing out on three provincial titles in a row against Monaghan last season inspired Donegal to beat the same opposition in Sunday's Ulster SFC final.

Speaking to RTÉ Sport about the 0-15 to 1-09 victory, McGuinness said:  "Coming here today, the memories of last year were very fresh. It didn't feel like a year ago.

"We had a lot of pain and a lot of hurt when we were going for three in a row. It's only when you lose something you realise what it means.

"They played today with the attitude that they weren't going to be beaten and that was the most pleasing thing."

McGuinness suggested that the satisfaction of regaining the Ulster crown was even bigger than when Donegal won the All-Ireland title in 2012.

"I think it's our best victory in terms of the questions that were being asked of us and what was being said about us, and had the boys got the stomach for it," he said.

"I think they proved that today. I think it's our best victory because of the circumstances and because what surrounded it.

"We were absolutely wrote off a week out from the Derry match and we're Ulster champions today.

"We were demoralised in Croke Park in the quarter-final last year. So to go from that point to put in a performance."

"If your character is questioned, it's a very important thing to any person in any walk of life.

"The character was questioned and there's only one way to sort that out, and that's to go back and try to win your province again."

Monaghan manager Malachy O'Rourke thought a few refereeing decisions had gone against his side but also accepted that Donegal were the better side on the day.

"We had our chances, especially when we got the goal we had chances to drive on but we weren't able to," he said.

"We missed a couple of frees that would have given us that lead we had last year. That's the way football works sometimes. We kept plugging away.

"But overall, I don't think we played well enough on the day to win the game and we just hold up our hands and have to accept that and move from this." 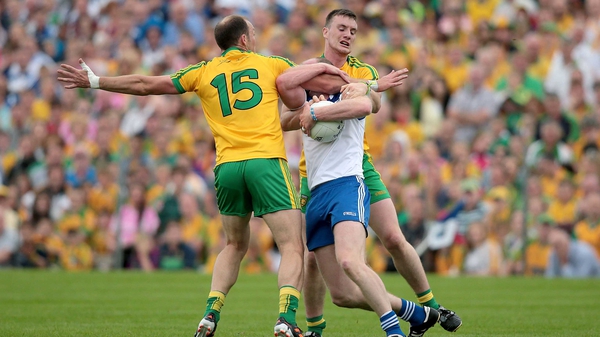