Donegal are Ulster Football champions once again following their 0-15 to 1-09 win over holders Monaghan in the final in Clones.

Two points each from Odhran MacNiallais and Colm McFadden sent Donegal in with a 0-06 to 0-04 interval advantage, with Paul Finlay hitting three for Monaghan.

Monaghan will face Kildare in the Qualifiers.

In front of a sell-out crowd of 31,912 at St Tiernach’s Park, this was a first Ulster Championship win for Tir Chonail over the Farney men since 1983, when they won a semi-final at Irvinestown.

Once again, a defensive approach did the trick for Jim McGuinness’ side as they gained revenge for last year’s defeat in the provincial decider.

For Monaghan, it’s the Qualifiers, and a clash with Kildare in a fortnight’s time.

Karl Lacey, a pre-match addition to Donegal’s starting line-up, got forward to hook over the opening score, and a superb effort from a difficult angle on the left from Odhran MacNiallais doubled the lead.

Colm McFadden had opened up a three points lead by the time Paul Finlay’s long range gem, got the defending champions off the mark in the 14th minute

Dessie Mone halted a Donegal attack with an interception to send Finlay in for his second, but they struggled to make inroads against a swarmed defence often containing as many as 13 yellow shirts.

With Paudie McKenna permanently stationed as an extra defender, protecting their full back line, Monaghan also adopted a cautious approach, offering little in the way of adventure.

The Farney men did manage to spot an opening at the back for Stephen Gollogly to release Fintan Kelly, but his shot on goal was superbly blocked by Lacey, who deflected the ball out for a ’45, which goalkeeper Rory Beggan stroked between the posts.

Finlay, the only Monaghan attacker to score in the first half, brought his tally to three in response to a second from MacNiallais, and at the break, Donegal led by 0-06 to 0-04.

Monaghan dispensed with the sweeper system, but the yellow wall of Donegal defenders remained virtually impenetrable.

Even when they pushed forward, Donegal held skipper Michael Murphy as an auxiliary midfielder, but they were still able to break at pace, hitting their opponents on the counter-attack to go further clear through MacNiallais and Paddy McBrearty.

McFadden’s fourth free made it double scores at 0-10 to 0-05 ten minutes after the restart.

But Monaghan continued to prise and probe, hoping that an opening would come their way. When it did, there was a touch of good fortune about their 49th minute goal.

Frank McGlynn failed to hold possession, and substitute Chris McGuinness seized upon the loose ball to smacked a perfectly placed shot into the bottom corner of Paul Durcan’s net.

Now it was a one point game, but Donegal once again turned up the pressure and the intensity to close out the tie, out-scoring their opponents by five points to three in the remaining 22 minutes.

Murphy was never a threat from play in front of the posts, but did convert two inspirational frees, one a massive effort from 60 metres.

Ryan McHugh was a key figure in those closing stages, getting forward to set up a couple of scores from McBrearty, and it was a reflection of Monaghan’s day that Conor McManus didn’t manage to hit the target until stoppage time. 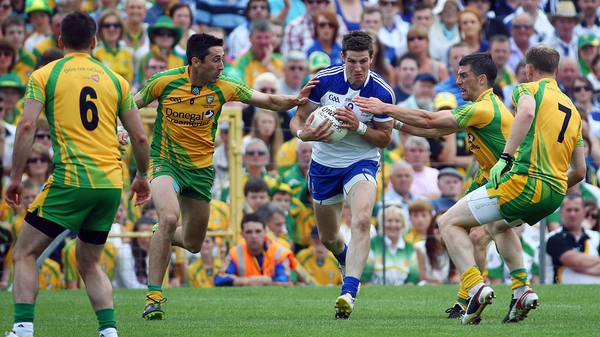