GAA president Liam O’Neill has called on managers to “take responsibility” for their players’ discipline following the pre-match brawl that marred Sunday’s Ulster Championship clash between Cavan and Armagh at the Athletic Grounds.

Fighting broke out over where players should line up for the pre-match parade and Cavan’s Martin Dunne sustained an arm injury that prevented him from playing.

No cards were issued by referee Marty Duffy after a melee involving the majority of the 30 starting players.

“We’d prefer that people would behave themselves. It took from what was a classic spectacle and that’s a pity.

“We’d like managers to take responsibility for their teams, line them up in an orderly manner and then go and do their parade and play the game.

“Unfortunately that didn’t happen yesterday, and it’s now the responsibility of the CCC to investigate and to see what action is appropriate.”

O’Neill admitted that such negative publicity is especially harmful, given the GAA’s moves to build the global profile of Gaelic games this year.

“It doesn’t help. Anything that damages our image is of concern to us and we’ll take this seriously and try to make sure it doesn’t happen again this summer.” 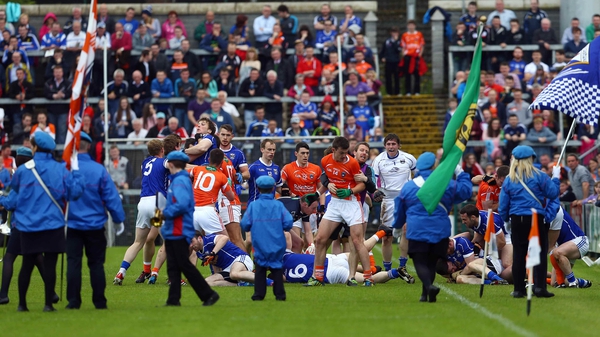 Violent scenes prior to Armagh and Cavan clash