Star Tyrone forward Stephen O'Neill has been ruled out of the rest of the county's Allianz Football League campaign after undergoing ankle surgery.

The 33-year-old missed the Red Hand's opening games over Mayo and Derry and had an operation last Friday, ahead of Tyrone's dramatic victory over Kildare in Newbridge.

Tyrone have made an impressive start to the season, retaining the Dr McKenna Cup and taking five points from their opening three games in the league.

O'Neill is targeting a return to action in the Ulster Senior Football Championship preliminary round game against Down on 18 May.

Meanwhile, Down have been dealt a blow with the news that Danny Hughes has retired from inter-county football after three years of persistent injuries.

"Danny hasn't had a free run since 2010," said Down manager James McCartan.

"He had major groin surgery last year and was a long time getting over that.

"He's been fairly frustrated that he hasn't been able to get a long period of time at training.

"We did speak a few times early on and he let me know where he stood, so we always knew it was going to be a 50-50 call.

"We're sad to see him step away but we wish him well."

The half-forward was named an All Star in 2010 for his performances in the Mourne men's run to the All-Ireland final.

Hughes scored three points in the decider as Cork secured the title by a single point. 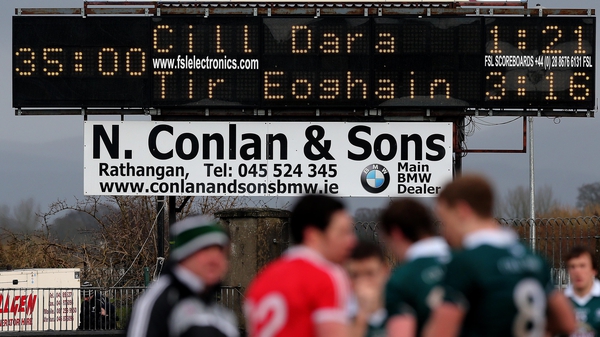