The future of the International Rules will come into question following a bruising second Test in Melbourne this morning where Ireland lost 63-42 to see Australia claim the Cormac McNallen Cup with a 163-106 aggregate score.

It was a case of win at all costs for the Aussies, and that they did, with alarming ease, romping to a 57 points aggregate win.  But their superb footballing display in the first Test in Perth was overshadowed by some shameful incidents in the deciding leg.

Cavanagh was denied a goal by Justin Fletchers reflex save, and the Aussies duly played their way into the game.

Matthew Lappin, Amon Buchanan and Ryan OKeefe were all on target, and at the first break the tourists led by 13-11.

Australia turned up the heat in a tempestuous second quarter, skipper Chris Johnson red-carded for a brutal high tackle on Philip Jordan. The Irish were unsettled, managing only one over in the period, while the home side floated over six three-pointers, including two each for Nick Davis and O’Keefe.

By the halfway stage, the aggregate deficit had grown to a massive 49   points, Australia taking a Test lead of 31-18.

Pete McGrath’s side did close the gap in the third quarter, with Ronan Clarke, Ciaran McManus and Cavanagh on target, but they just couldn’t break through for that elusive six-pointer, Cavanagh thwarted again by goalkeeper Fletcher.

Going into the final segment, Australia held a 40-32 lead, and despite the heroics of the brilliant Tom Kelly in defence they opened it out again, with Matthew Lappin, Andrew Lovett and Shannon Grant all hitting overs to see Australia ease to a significant victory.

The one bright note for Ireland was that Laois defender Tom Kelly, who put in another tireless display in his sixth International Rules game, was named Irish player of the Series at the trophy presentation afterwards. 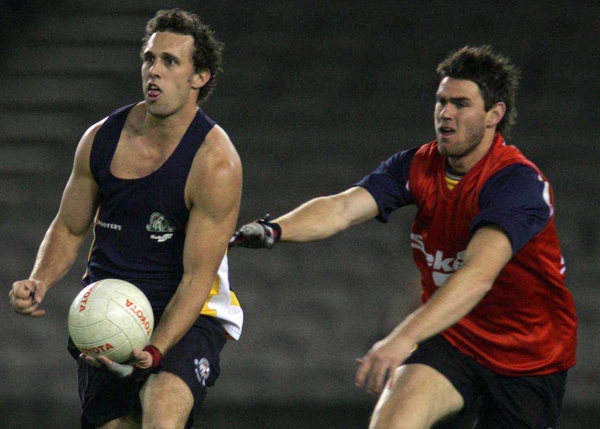