Given Con O'Callaghan’s importance to the Dublin footballers, it’s hard to quantify what his return from injury makes to Cuala as they strive for a maiden Dublin SFC county title.

As the metropolitans blazed a trail through the provincial championship last summer and seemingly steadying the ship after a dispiriting league campaign that ended in relegation, the three-time All Star was the focal point in attack.

The Cuala man picked off a combined 2-13 against Wexford, Meath and Kildare before injury struck. Having missed the entire league, he would play no part in the knockout stages of the championship.

Cork never looked seriously in danger of causing a quarter-final upset, yet at the same time, the O’Callaghan-shorn attack didn’t threaten to raise a green flag either.

"The forward line was clearly a blunter instrument in the absence of O'Callaghan, their creative spark and a perpetual menace to any defence," Tommy Conlon wrote in the Sunday Independent.

The semi-final showdown with Kerry was dominated by the Con v Clifford narrative. Would both men be fit to play?

Even allowing for Dublin’s struggles to match the form of previous years, the question surrounding O'Callaghan's participation seemed to be a tipping point for many.

"If Con O'Callaghan and James McCarthy play, I favour Dublin," predicted Colm O'Rourke such was the importance of the pair.

Only the Kingdom talisman featured, delivering a player-of-the-match performance in a game decided with the last kick of the game.

It is overly simplistic to suggest that the Cuala man would have helped the Dubs to a first win against a championship heavyweight since December 2020, but in a match ultimately decided by a single point, perhaps a below-par Dublin could have snuck through with the bustling forward in situ.

Either way, the Kerry full-back line, which like many others has suffered at the hands of O’Callaghan and company in the past, would have faced a more direct challenge.

Having only recently returned to full fitness, the five-time All-Ireland winner has been thrown back into the cut and thrust of life as a dual player. The Dalkey-based club remain involved in the latter stages of the championship in both codes.

This evening Cuala will perform in the second act of the Dublin football quarter-final double bill at Parnell Park (live on RTÉ2 from 5.05pm) where they will be huge underdogs against Kilmacud Crokes.

O’Callaghan missed the first round group game, but made a blistering impact a month ago on his return to action, kicking 1-06 against Clontarf where he was outscored by younger brother Niall, who finished the game with 3-01 to his name.

Last time out they ended Ballymun’s interest in the championship where O’Callaghan was a central figure throughout.

The hurlers have also benefitted from O’Callaghan’s return to play. They are seeking a sixth county title in nine years and their comeback victory over Ballyboden last time out sealed a semi-final spot.

A brilliant catch & point from Con O'Callaghan the last day out for @CualaCLG.

Cuala are back in action tomorrow against Ballyboden St Endas at Parnell Park.

O’Callaghan picked off three points upon his introduction after the break as Cuala made it five wins from five in the championship campaign.

Former Galway dual player Alan Kerins, who managed county and All-Ireland club titles in both hurling and football with his native Clarinbridge and Salthill Knocknacarra, says it is still a manageable feat at club level with management teams working together.

"I’m sure the club are very accommodating in terms of workload," he told RTÉ Sport. "I’m sure management common sense prevails to keep him fresh for both."

Kerins, a Celtic Cross winner with the Galway footballers in 2001, says that while dual inter-county players are pretty much consigned to a different era, the changed structure of the GAA calendar makes it more realistic for players with feet in both camps at club level, though O’Callaghan’s case is all the more challenging with Cuala’s form in the respective championships.

"From county to club season makes it more compact, so they are under more pressure.

"Senior clubs have gone so professional now in their preparation. When it’s game after game, and as you get older there could be injuries, it is so hard. And especially in clubs that will be competing for championship honours at the business end of the season.

"One knock now and you are out of both. The risk of playing both codes means you are increasing the chance of injury and missing crucial parts of the season."

O’Callaghan has been undoubtedly a huge loss to the Dublin hurlers, and the giddy excitement around rumours of a defection to Mattie Kenny’s camp earlier this year prompted the manager to come out as confirm no such event was about to take place.

A noted underage talent, a wider audience bore witness to his skillset with the small ball as Cuala captured back-to-back All-Ireland titles in 2017, leading Kilkenny legend Tommy Walsh to describe the gifted forward as "the best hurler in Ireland".

That observation was made with the inter-county season closed for business, yet it further emphasised the precocious talent.

"It was great to see him come through those Leinster and All-Ireland campaigns," says Kerins.

"He’s such a goalscoring threat with his direct running, similar to football. He’s so difficult with that power, pace and no shortage of skill. It’s a daunting ask for a club defender."

Fellow Tribe Daithi Burke is one of the few combining a senior dual club career with the soaring demands of an inter-county team competing for top honours, and O’Callaghan has never shied away from his love of hurling.

A week after completing the five-in-a-row under Jim Gavin, celebrations were cut short with sights fixed on the county hurling championship and a quarter-final joust with Crokes.

"It's a massive match for us," he said at the time. "I'll be down tomorrow night and I'd love to go ahead for the Crokes game." 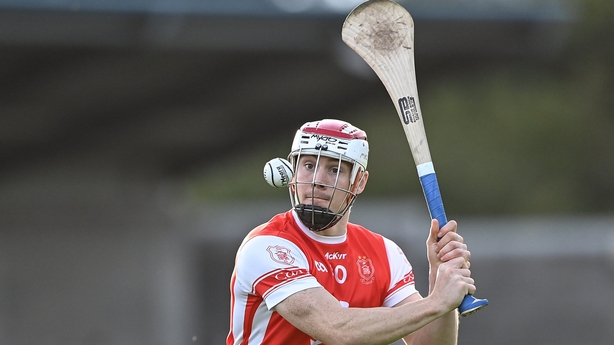 He duly ransacked the Kilmacud defence for 2-03 as they went on to claim further county honours.

A first ever senior football title will be driving those within the camp. In 2020 Senior two was annexed, but without promotion due to Covid, they were back there again a year later and repeated the trick.

Crokes are red-hot favourites to continue their journey and atone for last year’s dramatic All-Ireland final defeat to Kilcoo, but Cuala’s personnel involved means an upset and another step towards a slice of history is certainly not out of reach.

The O’Callaghan brother pack quite the punch attack, duly assisted in the scoring stakes by Luke Keating, scorer of 1-05 against Ballymun last time out.

Few outside the parish are tipping Cuala to prevail, but the presence of Callaghan alone makes it a far more inviting possibility.