Kerry players have been paying tribute to four-time All-Ireland winning manager Jack O'Connor who repeated his year one trick to end the county’s eight-year wait for Sam Maguire.

O’Connor has led the Kingdom to the ultimate honour in his first season in charge on three separate occasions – 2004, 2006 and 2022. His team also prevailed in 2009, with all four successes coming a season after Tyrone – his old adversaries – had scaled the mountain.

The latest Kerry triumph came against Galway on Sunday as Kerry put an off-colour first-half display behind them to find their shooting boots and triumph 0-20 to 0-16.

"Jack did a fantastic job, his football IQ is second to none.

"We’ve had a really good year not just in terms of the results, but we’ve really enjoyed training. It’s tough, we probably trained as hard as other years but this year was really enjoyable. Even for the old fellas having to do the runs."

The 34-year-old now has three All-Ireland titles to his name, and he felt that O’Connor’s style of play helped him personally this season.

'I thought he had mellowed until half-time...'
David Moran chats to @Joanne_Cantwell about Jack O'Connor and his own return to fitness at the @Kerry_Official banquet#rtegaa
📺 Watch https://t.co/NcrNtKeU0O pic.twitter.com/c9LLFisqzO

"It’s probably more of a traditional Kerry football game. Sometimes these things are results driven and when you win it’s great, and today was great."

Tadhg Morley was another full of praise for O’Connor, especially his ability to connect with his players.

"He’s an incredible man-manager," he said.

"He creates a great rapport with his players and he builds a really good management team around him. He was a great manager."

On RTÉ Radio 1’s Morning Ireland, Paul Geaney thanked not only O’Connor but the entire management team for securing the triumph.

"All I can feel since the final whistle is a bit of relief. Also just very grateful.

"We’ve had our downs definitely since 2014, it’s been a long road. A long eight years in between for me and Stephen [O’Brien] and Paul Murphy and David Moran [the four remaining players from 2014].

"The other guys who came shortly afterwards, the likes of them Tadhg Morley and them, it’s been eight years of tough work.

"Every year we felt we had enough to go on, but these things are not won easy. There was obviously a great Dublin team in there and Tyrone pipped us last year.

"There’s just relief there and extreme gratefulness that I'm still involved with such a great group of people, not just players but people. The whole group, the backroom team, the whole lot, it’s a pleasure to be a part of it." 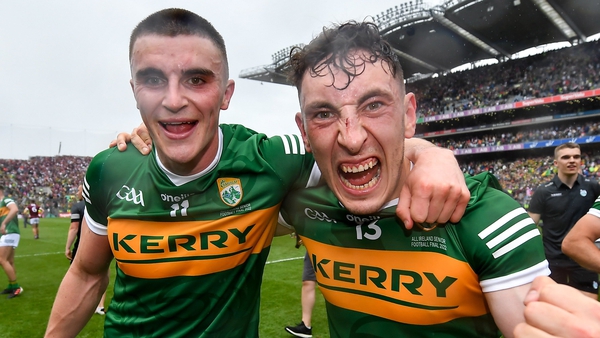