A third year in the Galway hotseat was always going to be crucial for Pádraic Joyce. It was time to deliver.

Another loss to Mayo in Connacht would have been hard to take, particularly in light of Galway's collapse against their neighbours in the 2021 provincial decider. The Tribesmen led by five at half time on a sun-drenched day at Croker but ended up losing by six. No back door was available.

There was pressure then on Joyce to get it right in Castlebar back on 24 April last. They did just that; a one-point win doing little to highlight that they were much better than Mayo on the day. Galway's year was up and running.

A Connacht title followed. Joyce's men then shed their tag of being the possessors of a soft underbelly, hard-fought wins over Armagh and Derry in contrasting circumstances going some way to scotching that perception. And now it's a first All-Ireland final appearance in 21 years for Galway. Kerry are the opposition. On paper it has the potential to be classic contest, with both sides possessing a formidable attacking threat. Throw in a defensive solidity that both have worked on in recent times and further intrigue is added.

Of the games played between the sides in the 1950s and 60s, Mick O'Dwyer spoke about Galway being Kerry's bête noire in All-Ireland finals - an itch the Kingdom couldn't scratch. There would seem to be no fear of football's aristocrats out west.

Speaking to RTÉ Sport ahead of Sunday's Croke Park showdown, Joyce, while acutely aware of Kerry's stature, will certainly be leading a squad who won't be bending the knee.

"Our lads will hold no fear of Kerry, they respect them, don't get me wrong, but they definitely hold no fear," said the two-time All-Ireland winner from 1998 and 2001.

"They (Kerry) are the aristocrats of Gaelic football so it is going to be a tough final, we know that. A lot of our lads have played against them underage in the last few years, some would have beaten them in '18 (Super 8s) and met them again in Sigerson this year.

"Preparations have gone well. It's been very enjoyable in Galway, the clubs and all the towns have got right behind the team which is great."

Key battles are expected all over the pitch in this year's final, with Joyce, not surprisingly, identifying one key sector and one key player.

"The key battle of all will be in the forward lines. Both sets of forwards are very strong and whichever team gets the best ball into their forwards will be the deciding factor. We have plenty to mark David Clifford, we certainly won't leave him on his own. No one is going to tell me he's not going to score on Sunday - of course he is - if we can limit the damage we'll be doing well."

The Galway boss has always been bullish that winning Sam Maguire is what it's all about. After the semi-final win over Derry, he told the waiting press: "I'd said from day one since I got the job, it's about winning an All-Ireland.

"Ye lads know from writing about us, there'd be a soft belly that people see in Galway

"It's taken us three years to get here but lookit, we're here now so we're definitely going to make the most of it.

"So after winning that game (against Armagh) and the way we won it, being six up, letting them back into it, and the row, normally gone by we might have folded a bit, but we took a lot of solace from that."

Days out from Galway's biggest game in over two decades, the mantra is still the same.

"Success will be determined by how Sunday goes so need to put silverware behind it," Joyce added.

"The key for us management is to make sure that the players perform to the levels, if they do that we'll be in good shape.

"It will be a great day out, we'll have great support there. We're looking forward to the challenge on Sunday."

Watch Up for the Match this Saturday from 9.45pm on RTÉ One and RTÉ Player. 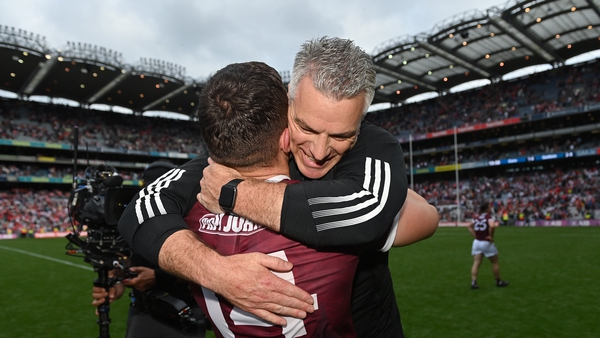 Joyce: I said from day one, it's about winning an All-Ireland