The Galway and Armagh senior football camps must now decide how to respond after the conclusion of an investigation by the GAA's Central Competitions Control Committee following last Sunday’s unsavoury scenes at Croke Park.

The CCCC spent the week reviewing the fracas which took place at the end of normal time in last weekend’s All-Ireland senior football quarter-final.

It’s understood that notifications have tonight been issued to both counties by the GAA.

It’s widely expected that Armagh’s Tiernan Kelly could be hit with a lengthy ban following his part in the brawl.

Kelly was red-carded for 'contributing to a melee' but Galway are likely to appeal as video footage appears to show him trying to stop others from getting involved in the row.

It's also believed that up to four other players - who were not red carded last weekend - could also be hit retrospectively with suspensions. And there is the prospect that both county boards could receive hefty fines from HQ following the incidents at the end of normal time.

It’s expected that both counties will consider their response and with Galway facing Derry in the All-Ireland semi-final on 9 July, they will be keen to address these latest developments as quickly as possible.

Indeed, Galway could have an appeal heard as early as tomorrow. 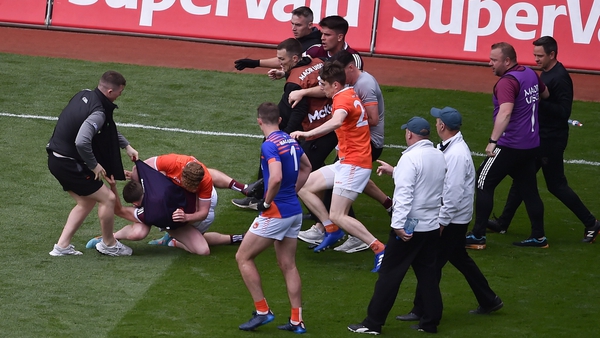