Dublin pair James McCarthy and Con O'Callaghan have not been named in Dessie Farrell's starting side for today’s All-Ireland SFC quarter-final against Cork at Croke Park.

Although a full panel list has not been revealed, RTÉ Sport understands that neither will be in the matchday 26, amid reports of hamstring injuries.

Seven-time All-Ireland winner Jonny Cooper, Paddy Small and Niall Scully come in, in three changes from the team that thrashed Kildare in the Leinster final, with the aforementioned pair and Lorcan O'Dell dropping out.

Cork manager John Cleary has kept faith with the XV that beat Limerick in the qualifiers for Saturday's tall quarter-final task against Dublin.

David Clifford will start against Mayo on Sunday after being named at full-forward by Kerry manager Jack O'Connor.

The 23-year-old hit 1-06 against the Green and Red in April's Allianz Football League Division 1 decider but missed the Kingdom's Munster final triumph over Limerick with a calf injury.

The three-time All-Star comes into the side alongside David Moran and Dara Moynihan, with Tony Brosnan, Killian Spillane and Jack Barry dropping out.

Barry and Adrian Spillane both miss out on a place in the panel.

Mayo have made one change, Jordan Flynn replacing Jason Doherty at wing-forward.

The subs have not been released so it is not known whether Ryan O'Donoghue, who missed the qualifier wins over Monaghan and Kildare with a groin injury, could make an appearance off the bench.

Rory Gallagher has made one switch from the Derry team that beat Donegal to claim the Ulster title.

Emmett Bradley comes into the XV to face Clare on Saturday and Niall Toner is among the substitutes.

Clare have also made one change with Cillian Brennan returning from injury, Alan Sweeney drops out.

Galway manager Pádraic Joyce, meanwhile, has named an unchanged side for Sunday's clash with Armagh. The Tribesmen will start with the same 15 that defeated Roscommon in the Connacht final on 29 May.

Kieran McGeeney has made one change to his Armagh side for the game. Jemar Hall comes in at half-forward with Andrew Murnin missing out. 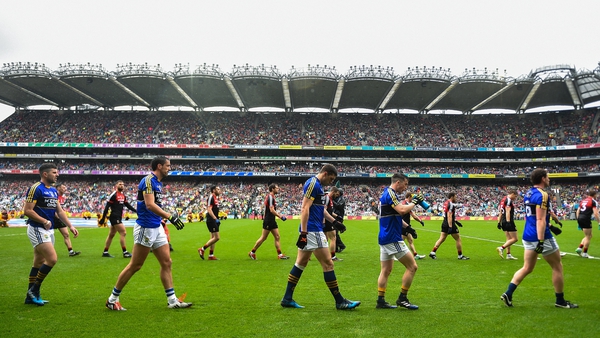 All-Ireland SFC quarter-finals: All you need to know