Cork continued their good early-season form as they began the Allianz Football League Division 1 campaign with a comprehensive victory over Mayo at Páirc Uí Rinn on Sunday.

Nine points separated the teams at the end, but even that was somewhat flattering to a Mayo side which scored the game’s last five points as Cork finished with 13 men and dropped their intensity levels in the closing stages.

The first hour of this encounter were very one-sided, with Cork’s lead standing at 14 points after Brian Hurley sent Robert Hennelly the wrong way from the penalty spot after Michael Hall had fouled Mark Collins.

That was actually Cork’s second spot-kick, Daniel Goulding having been denied by Hennelly early in the second half.

But that miss scarcely mattered as it came in the midst of five unanswered points from Peadar Healy’s side after the restart, the hosts having led by 0-12 to 0-4 at half-time.

The game’s first four points were shared, Jason Doherty’s two points from Mayo answering Cork’s openers from Hurley and Goulding, who finished with 1-9 between them.

After that though, there was only one team in it, Cork far sharper as they carried on where they left off in their successful McGrath Cup campaign.

Paul Kerrigan marked his appointment as captain with a man-of-the-match display while Eoin Cadogan and Tomás Clancy shone in defence and Ian Maguire – who missed most of 2015 after a freak back injury – settling in well at midfield. 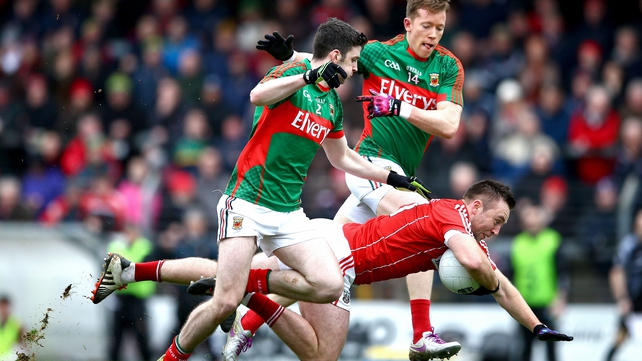 Brian O’Driscoll and Luke Connolly were others to get on the scoresheet and not even the introduction of All Star Aidan O’Shea after half an hour was able to rouse Mayo.

With eight points between the teams at half-time, a big response would have been expected from Mayo, but instead it was Cork who sewed things up.

Cork had used all of their subs when Brian O’Driscoll was black-carded and the Andrew O’Sullivan received a second booking, but they had done enough to see out the game.

Maguire, Hurley, Connolly, Kerrigan and O’Driscoll all got points as the Mayo contingent in the attendance of 4,849 began to realise that it wasn’t going to be their day.

Hennelly’s save from Goulding was a brief bright spot, along with three points in a row from Conor O’Shea, Evan Regan and Mickey Sweeney, but Cork quickly moved to quell that fightback.

Kerrigan scored a fine individual point to put them eleven points ahead and then Hurley converted from the spot when they were awarded a second penalty.

They wouldn’t register again and Regan, O’Shea, Tom Parsons (two) and Sweeney all scored for Mayo, but it mattered little. 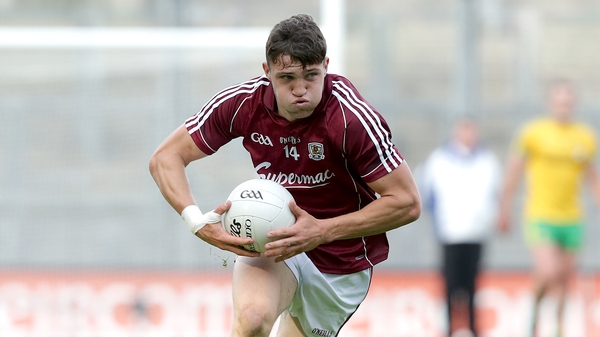