Laois ran riot against an overmatched and outgunned Carlow at Dr Cullen Park, recording a 3-16 to 0-08 victory to set up a Leinster Senior Football Championship quarter-final against old rivals Kildare.

Conor Boyle, Donie Kingston and Tom Shiel were the goalscorers, and with a bit of luck the visitors might have had three more goals as they imposed themselves impressively on their opponents.

Carlow didn’t help themselves by turning over the ball too easily, often through inaccurate passing, but Laois were on a different level in terms of athleticism and movement.

Turlough O’Brien was confined to the stands as a result of suspension and he might have had a slight upsurge in optimism mid-way through the first half as Carlow scored three out of four points to get within four.

Kingston and Darren Strong had notched up a brace apiece as Laois kicked the first six points, but Daniel St Ledger’s excellently-struck free from 43 metres into the wind seemed to settle Carlow.

Kieran Nolan and Darragh Foley added to the tally but a 27th-minute goal from Conor Boyle, after Niall Donoher had broken in behind the defence, halted the resistance. 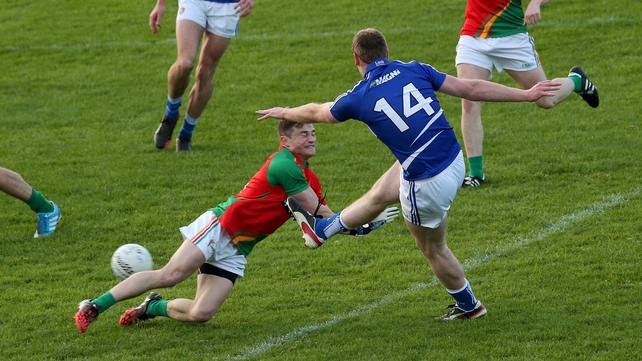 O’Carroll (45) and Kingston (free) had points before the outstanding John O’Loughlin fired over his second with his left boot to make it 1-10 to 0-03 at half-time.

Foley kicked an early free for Carlow but Laois swiftly removed any faint hope of a wind-assisted comeback with three quick points from the Kingston brothers, Donie and Paul, and Ross Munnelly.

O’Loughlin and Brendan Quigley lorded the skies and a brilliant catch by the former started a move that was continued by Boyle before Donie Kingston drilled a low shot from 20 metres to the Carlow net in the 54th minute.

The full-forward had already blazed one shot wide, and later on, was denied what would have been a wonderful individual goal by Shane Redmond’s last-ditch clearance. Robbie Molloy also denied Stephen Attride with a brave block.

Substitute Tom Shiel showed blinding pace before blasting a bullet beyond Molloy from a tight angle to finally record a third goal and the game wound down to an inevitable conclusion. 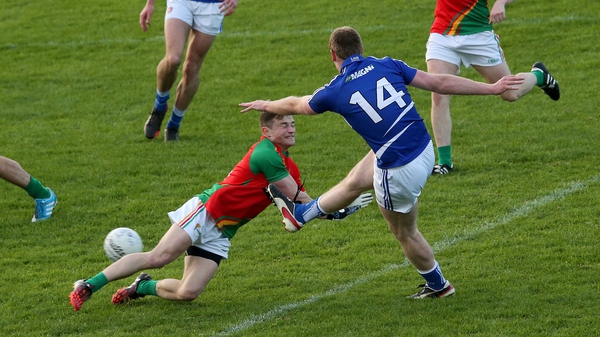