Dublin secured their third Allianz Football League title in a row with a 1-21 to 2-07 win over Cork at Croke Park.

Dean Rock helped himself to a perfect 10 points as Dublin achieved their first ever three-in-a-row of titles.

Jim Gavin's side cruised to a surprisingly comfortable win in front of 31,548 to sign off on their league campaign in spectacular fashion.

Aside from Rock, who shot seven of his 10 points from placed balls, Dublin had an inspirational performer in Jack McCaffrey who was named man of the match.

It could have been worse than a 13-point defeat for Cork who scored two goals in the final 20 minutes through Mark Collins and Daniel Goulding.

Dublin famously had to come from 10 down against the same opponents in last year's league semi-final, eventually winning by seven.

There was no requirement for such heroics this time around as they started with gusto and moved into a big lead that they wouldn't relinquish.

With 13 minutes on the clock, Dublin led by 0-05 to 0-00 and already it was looking ominous for the Rebels. 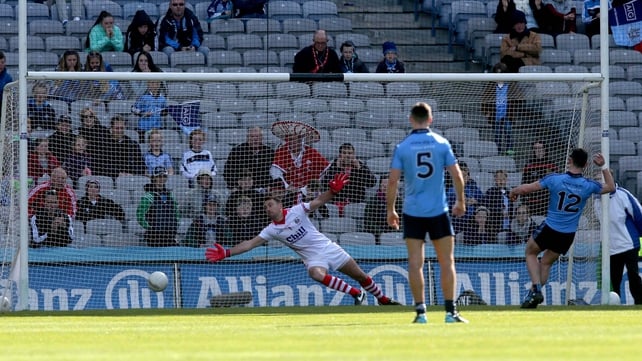 They overcame Dublin in their group match at Páirc Uí Rinn but were painfully unable to prevent the damage being done this time around.

They did briefly threaten to make a game of it when they kicked three points in a row to trail 0-07 to 0-04 after half an hour.

But a strong finish to the half from Dublin that included a Diarmuid Connolly penalty conversion put them well in the clear again.

Bernard Brogan's first point of the afternoon and one from Ciaran Kilkenny left them sitting pretty at the break, 1-09 to 0-05.

It was in the third quarter that Dublin began a memorable revival in last year's semi-final.

They went a long way to sealing victory in the same period here with six points in a row after the restart. 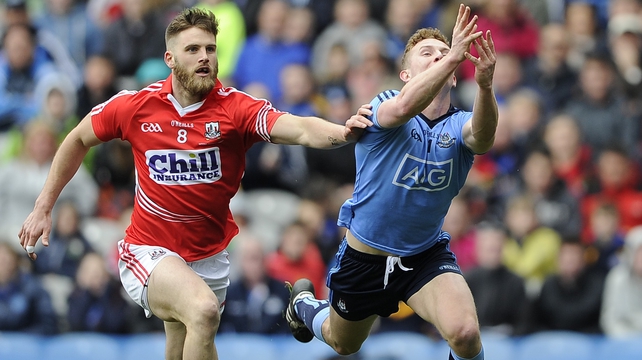 McCaffrey pointed after his initial shot cannoned off the woodwork before further scores from Rock, Tomas Brady and Brogan.

With 20 minutes to go, Dublin led 1-15 to 0-05 and victory was all but certain. Boss Gavin took the opportunity to run in his full allocation of subs by full-time.

Poor Cork only got their first score from play in the 49th minute. It was at least a Collins goal when he cut inside his man and shot low and left beyond Stephen Cluxton.

Colm O'Neill was dangerous when in possession and added his fifth and sixth points approaching the last 10 minutes.

But Dublin were never pressurised and continued to pick off points at their ease.

Paddy Andrews scored two after coming on as a substitute, pressing his case for inclusion against Offaly or Longford in the Leinster quarter-finals on 31 May.

Sub Goulding wrapped up the scoring with a late goal for Cork.

Read how the game unfolded here. 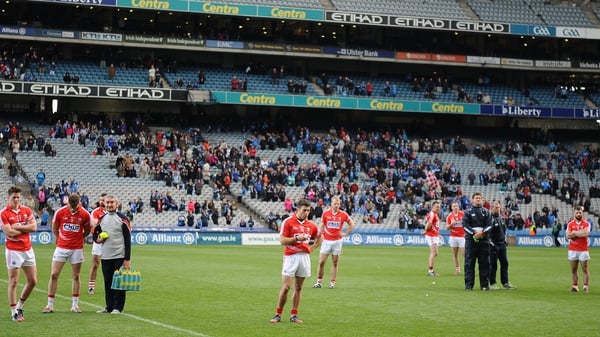 Brian Cuthbert: Cork will move on quickly from Dublin defeat