In a game that will not live long in the memory, Monaghan fully deserved their two-point victory over Donegal in Division 1 of the Allianz Football League at O'Donnell Park, Letterkenny.

Both sides were intent on playing ultra-defensive football and, in the battle of minds, Monaghan won out in the final minutes with points from goalkeeper Rory Beggan and centre-back Fintan Kelly.

Donegal were toothless in attack in the second half, only getting one score, a goal from Michael Murphy eight minutes after the interval when he got on the end of a high Neil Gallagher delivery to punch to the net.

But that score only galvanised Monaghan and they ground out the result, with the Hughes brothers, Darren and Kieran, driving them on.

Paul Finlay drew them level with two pointed frees and then came the late points to seal victory as Donegal just couldn't make any inroads against the Monaghan defence.

Even the strong wind could not be put forward as an excuse for the defensive display of both sides in the opening.

The standard of football was dire with Monaghan parking two buses and Donegal just playing the ball over and back on the 45m line.

Midway through the half, the frustration of the large group of spectators began to show as they urged Donegal to attack.
Monaghan, even though they had the wind at their backs, had only one and sometimes no forward up front.

Donegal started well with three points in 11 minutes, all frees - two of them from Michael Murphy and the other from Patrick McBrearty.

The only point from play of the half came on 12 minutes when Conor McManus, a late inclusion in the Monaghan side, found Kieran Hughes to fire over.

Eleven minutes passed before the next score, Conor McManus pointing a free, but then a few minutes later McManus was involved in a tangle off the ball with Neil McGee and after consulting with his umpires, referee Padraig Hughes showed McManus a black card.

Paul Finlay kicked a point from a questionable free while Mark McHugh and Frank McGlynn worked an opening to win a soft free at the other end and Michael Murphy pointed.

In added time at the end of the opening half, Ryan McAnespie made a great run forward to win a free for Monaghan and Finlay pointed to leave the sides level at 0-4 each at the break.

Subs: A Thompson for Doherty; M McElhinney for Toye, both ht; C McFadden for Lacey 36; D McLauglin for McBrearty; E McHugh for E McGee, both 54; G McFadden for MacNiallais 65. 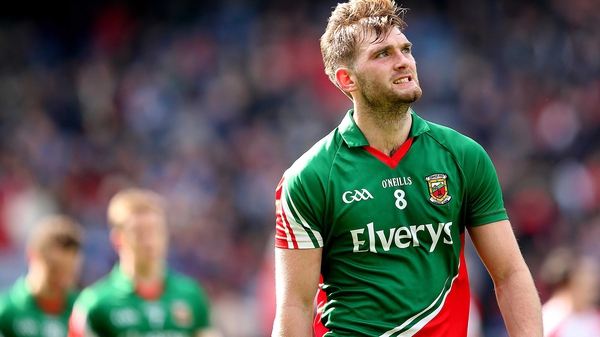