Mayo got back to winning ways as they disposed of 13-man Monaghan by 3-15 to 0-11 in a fiery game at McHale Park in Castlebar.

Stephen Gollogly and Ryan Wylie were sent off in either half as the Oriel County completely lost their discipline and Mayo pulled clear with Aidan O’Shea’s second-half goal putting daylight between the teams after a tight first half.

The Breaffy man kicked 1-03 in his makeshift full-forward role as he dominated the Monaghan defence who failed to deal with Mayo’s attackers.

Alan Freeman and Michael Sweeney added further goals as Mayo capitalised on the dismissals and finished with a flourish.

Monaghan fought against a stiff breeze in the opening half and despite Galway and Roscommon’s matches being called off, this clash in Castlebar was never in doubt.

Visiting goalkeeper Rory Beggan got the scoring underway with a pinpoint free before Mayo skipped into a quick lead with makeshift full forward Aidan O’Shea popping one over and key marksman Cillian O’Connor  opening his account from a free.

The hosts must have wondered how they didn’t fire an opening half goal as O’Shea began to unleash havoc in the Monaghan defence and after five minutes had an effort saved by Beggan following a poor kick-out.

Kieran Hughes scored a cracking point at the other end to square the game before Monaghan’s defence was again unlocked and again the towering O’Shea was denied by Beggan’s save.

Daniel McKenna gave Monaghan the edge before a slick Mayo attack saw Kevin McLoughlin play a neat exchange with Jason Doherty and his scuffed effort was cleared off the line by Dessie Mone.

The pace and end-to-end flow to the game continued as McKenna’s free put Monaghan 0-04 to 0-02 in front, before McLoughlin was this time played in by Cillian O’Connor and his low drive flashed wide.

Monaghan’s kick-outs were still costing them and Donal Vaughan split the posts when a short Beggan kick put his defence under pressure against the howling wind.

McKenna’s cracker for the Ulster outfit was followed by three Mayo scores on the trot as Ronaldson, Cillian O’Connor and Jason Doherty all split the posts before Gollogly was the first to see red for his closed-hand strike on Doherty.

A minute later, Mayo lost Seamus O’Shea to a black card for a cynical trip, as O’Connor’s free and a Kevin McLoughlin score gave the hosts a 0-09 to 0-06 interval lead.

After the restart Monaghan’s challenge wilted badly after Aidan O’Shea’s goal on 50 minutes after Diarmuid O’Connor and Ronaldson had pulled them further clear.

Ryan Wylie was the next man to see Rory Hickey’s red card for shoving Ronaldson violently into the fencing on the sideline as Mayo then turned the screw and began shooting practice.

Points from Ronaldson and Aidan O’Shea sailed over before Alan Freeman announced his arrival from the bench with a well-taken goal when in acres of space, as Finlay, Kieran Hughes and Paul Meegan struck late Monaghan consolations.

Kiltane man Michael Sweeney then raised Mayo’s third green flag in the final minute to make amends for an earlier wide to seal the emphatic 13-point victory for the Connacht giants. 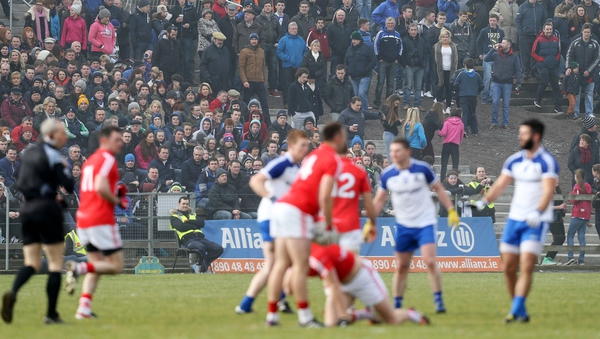