This game was played at a frantic pace throughout, with the sides level on nine occasions, before a 70th-minute O’Neill point was the match winner.

Monaghan had a four-point lead pegged back on two occasions by Cork, with O’Neill’s goals in the 42nd and 50th minutes, respectively, vital.

Monaghan forged ahead thanks to scores from Paul Finlay and Conor McManus (0-09), with McManus’s ninth point levelling the tie on 67 minutes.

O’Neill pushed Cork ahead on the stroke of injury-time, but with three minutes to follow Monaghan had a chance of an equaliser, but McManus missed a last-gasp free.

Both managers opted to make changes before throw-in, with John O’Rourke coming in instead of Fintan Goold for Cork, with Mark Collins partnering Ian Maguire at midfield for the throw-in.

Monaghan made a brace of changes, with McManus replacing Darren Hughes, who missed out because of a groin injury, and Finlay coming in for Dick Clerkin. Both selected players would have a major say in this match.

The match was delayed by five minutes due to the large crowd at the well appointed mid-Monaghan venue, but once the action got going, it was akin to a hurling pace, as both sides quickly set out their stall.

The home side defenders made a positive early showing, not just at the back, but also in attack, with half-back’s Fintan Kelly and Kieran Duffy on target inside the opening two minutes.

0-02 to 0-01 ahead after two minutes, Monaghan looked good, but their scores were met quickly by a score from the Rebels.

The sides were tied on four occasions inside the opening 15 minutes, with each Cork score coming from a pointed free, as O’Neill and Donncha O’Connor shared equally four points.

McManus added Monaghan’s third and fourth points from frees, with the hosts putting strong pressure on the Cork rear-guard.

Finlay and McAnespie were both involved in the build-up before birthday boy Hughes sliced the ball to the net to push Monaghan 1-04 to 0-04 ahead.

That goal kept Monaghan on top for the remainder of the half, despite a trio of O’Connor points, with defender Conor Boyle also delivering an excellent score for the hosts.

Monaghan came good once more on the restart, with McManus and Finlay pushing Malachy O’Rourke’s side 1-09 to 0-08 ahead after 41 minutes.

But this was cancelled out with 1-01, including O’Neill’s first goal, and although Monaghan stole four points clear, again it was O’Neill who brought the Rebels back into contention.

The Ballyclough clubman fired Cork’s second goal with 16 minutes left on the clock, after Paul Finlay dipped the ball into the hands of Ken O’Halloran at the opposite end.

An O’Neill point popped Cork ahead, and although scores from Finlay and McManus pushed the hosts ahead by the minimum, Cork didn’t relent.

This result, and those elsewhere leave Cork as the only team in the division with a brace of wins after the first two games. 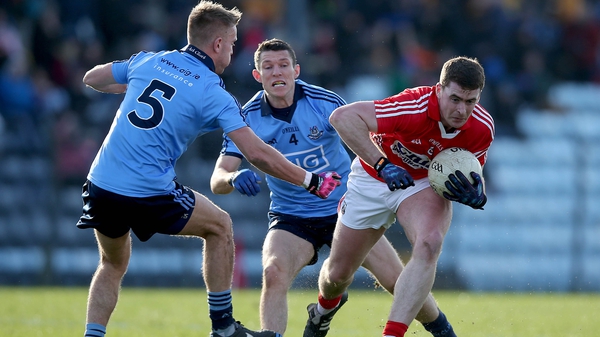