Lesser teams than the Galway champions would have been mentally crushed after Tomás Quinn put St Vincents in the lead with a penalty in the 23rd minute, having spurned three goal chances at the other end.

However, they drove down the field to strike a goal of their own through Martin Farragher and went on to build up a 1-11 to 1-06 lead six minutes after half time.

Three scores in-a-row for Vincents threatened to swing momentum back in favour of the Marino side but Corofin dominated the final quarter to secure victory, holding their opponents scoreless and eventually securing the insurance scores that they needed though Ian Burke, Gary Sice and Michael Farragher.

The 4,188 supporters that travelled to the midlands were treated to an outstanding hour of football with both sides looking to move the ball with the foot as fast as possible.

For the first half in particular, the pace of the game and the accuracy of Corofin’s diagonal foot passing was simply sublime.

They conceded two of the first three scores to fall behind, one of which was a stunning Diarmuid Connolly strike from out on the right wing, but while the Dublin centre-forward provided his team with a mercurial scoring talent, he along with every other player was overshadowed this afternoon by the force of nature that was Michael Lundy of Corofin.

The Galway wing-forward was at the heart of all his team’s best work in this tie and either side of kicking his side’s first point from play, he drew two fouls to allow Gary Sice to put Corofin back into the lead.

Ian Burke was also in fine scoring form for the Connacht champions and he had the game’s first goal chance in the 13th minute when Daithí Burke flicked the ball into his path on the edge of the large square, but Michael Savage did brilliantly in the Vincent's goal to close down the angle and deflect his shot out for a 45 metre kick.

Corofin were the superior team throughout the opening half but they weren’t making their supremacy count on the scoreboard and two further goal chances were spurned before it looked as if they’d make their breakthrough from the penalty spot.

Again, Lundy was central to their efforts as he centred the ball from the left corner into the path of Gary Sice, who in turn was dragged to the ground by Brendan Egan.

Gary Delaney stepped up to take the penalty but crashed his shot off the crossbar and 30 seconds later referee Padraig Hughes was again stretching his arms wide, this time for a foul by Kieran Fitzgerald on Ciarán Dorney.

Tomás Quinn made no mistake with the kick, neatly placing the ball into the bottom corner and when Brendan Egan followed up with a close-range point to make it 1-06 to 0-07 to the All Ireland champions, Corofin could have been forgiven for feeling that they had failed to cash in on their early dominance and were about to pay a heavy price for that failure.

At that moment good fortune smiled upon them as a long ball from Ronan Steede broke kindly for Lundy and he promptly barrelled through the heart of the St Vincent's defence to set up Martin Farragher in front of goal.

Jarlath Curley almost deflected Farragher’s effort clear but the ball crept over the line to put Corofin back in front.

Further points from play from Lundy either side of half-time appeared to add fuel to Corofin’s momentum and they were soon five points in front before scores from Connolly (twice) and Quinn pulled Vincent's right back into contention by the midway point of the half.

Indeed matters could have been much worse for Corofin had Padraig Hughes not handed them another reprieve shortly after the interval. Ciarán Dorney successfully slipped a low shot underneath the legs of Tom Healy and it fell to Cathal Silke to dive on the ball and save a second goal. It appeared as if the Corofin defender handled the ball on the ground, but Hughes waved play on.

If Vincents had got out of jail however it would have been a travesty as Corofin regained their vim and vigour in the final ten minutes and stamped their class on the tie one last time.

Vital interventions from Kieran McGrath and Kieran Fitzgerald snuffed out the Vincents dangermen, Daithí Burke made a couple of wonderful catches at midfield and three late points secured their progression to the All-Ireland Club final in just over four weeks’ time. 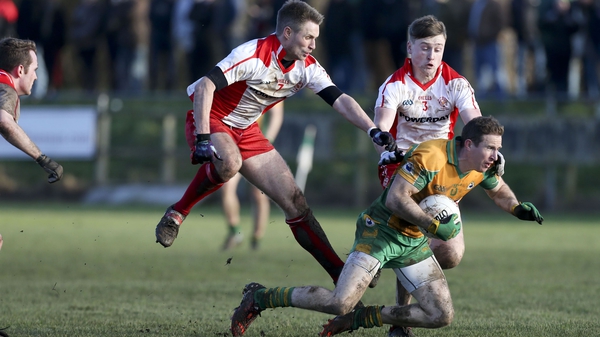