Corofin were forced to dig deep as they overcame a dogged Tir Chonaill Gaels side at Ruislip.

The Galway champions looked in trouble at the interval, leading by just a single point after failing to utilise the strong breeze.

But Tir Chonaill Gaels’ hopes of a first All-Ireland quarter-final victory in 15 attempts were quickly quashed after the restart as Gary Sice dragged his side to victory, the half-forward kicking five second-half points.

Corofin travelled to London in free-scoring form, having hit 14-45 in their previous three championship games, but they struggled to break down their hosts during a scrappy first half.

Playing with a strong breeze on their backs, Corofin enjoyed bags of possession, and they opened the scoring after two minutes when Michael Farragher punished a defensive error.

But the visitors’ next score didn’t arrive until the final minute of the first half, which was due to a combination of excellent Tir Chonaill Gaels defending and some wayward shooting.

Substitute Brian Collins made a vital interception on 12 minutes to deny what looked a certain goal, but Corofin should have found the back of the net moments later when Ian Burke sent captain Michael Farragher racing through.

The half-forward went for the top corner but saw his shot go inches past the post.

Sice had another attempt blocked as Corofin continued to press, but Tir Chonaill Gaels enjoyed a dominant spell towards the end of the first half.

With Aidan Downes excelling in a sweeper role, the Greenford-based club began to threaten and Cathal O’Neill levelled matters on 24 minutes when he blasted over from close range.

Declan Traynor did well to catch a Sice shot before it dipped over the crossbar, but the Gaels goalkeeper was fortunate to not be punished after he embarked on a Shane Curran-style foray upfield, only to be dispossessed on halfway.

Ian Burke, who had previously been off target from a free, once again failed to hit the target.

Martin Farragher ensured Corofin did lead at the break after he gave Philip Butler the slip and pointed, but Tir Chonaill Gaels were the happier side as the teams headed for the dressing rooms.

Sice was guilty of another glaring wide during the early stages of the second half, firing wide from a close-range free, but instead of letting his head drop, the miss had the opposite effect.

From the next passage of play, Sice boomed a superb point, and he added two more from placed balls as Corofin hit four scores in eight minutes to leave their opponents chasing the game.

Tir Chonaill Gaels were gifted a glorious goal chance on 42 minutes when Thomas Healy’s short kickout went straight to Darren Gilsenan, but Cathal Magee took his eye off the ball and it allowed Healy to redeem himself.

Sice added another pair of frees in the final quarter as the game began to peter out, while some late pressure from TCG was rewarded with the consolation of a late score from substitute Eoin O’Neill. 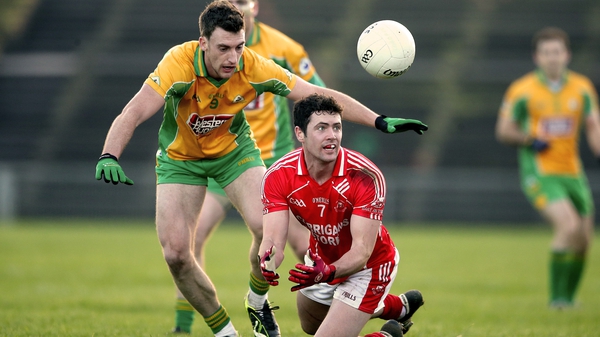 Corofin cruise to another Connacht title