Corofin cruised to their sixth Connacht SFC club title when they never trailed to Ballintubber in the final at at MacHale Park in Castlebar.

Corofin dominated the opening half but had to be content with a 0-07 to 0-04 interval lead.

But once Gary Sice drilled home their first goal eight minutes after the restart they never looked back and Sice then set up Ian Burke for the decisive second goal three minutes later.

Ballintubber, appearing in their first provincial final, just never got going and could not break down a strong Corofin defence.

Cillian O’Connor was Ballintubber’s only scorer in the opening half and by the end of the contest only another All-Star, Alan Dillon, had managed to find the range for the Mayo champions.

In contrast, Corofin picked off scores from all angles as they led from the outset with man of the match Burke landing some excellent scores in the opening half. 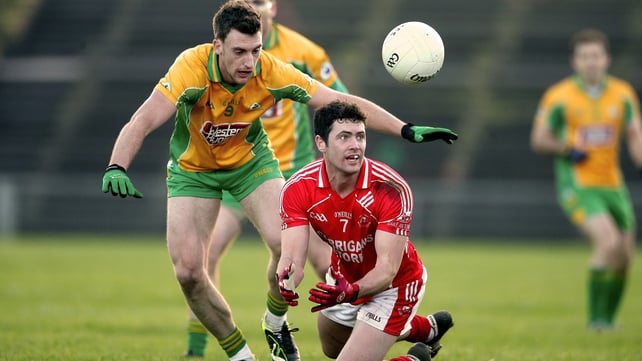 They were boosted by captain Mike Farragher being declared fit to play and he also found the target in the opening half.

Corofin may have been concerned that they were only three points in front after being on top for so long in the opening half.

But they corrected that after the restart and hit 2-03 without reply in the third quarter with former Galway captain Kieran Fitzgerald setting them on their way with a point three minutes after the restart.

The crucial score came five minutes later when Sice hit Corofin’s first goal and after Ronan Steede landed a point, Sice set up Ian Burke for a fisted goal as Corofin opened up a 2-10 to 0-04 lead after 43 minutes.

Balltintubber were shell-shocked but did manage to hit back and Dillon drilled home a good goal into the bottom left corner but a comeback never looked on the cards as the Corofin defence got on top again.

Corofin continued to play constructive football to the end and must be serious contenders to repeat their 1998 All-Ireland success when they became the first team from Connacht to win the Andy Merrigan Cup.