Holders Tyrone remain on course for a fourth successive Dr McKenna Cup title after beating Antrim by 1-11 to 0-07 at Clones.

Goalkeeper Chris Kerr, who had denied Tyrone with excellent saves from Cavanagh and Coney, dropped a ball into the path of Coney for a 38th-minute goal, and Mickey Harte’s side never looked back.

Tyrone will face Armagh in the semi-final on Wednesday evening at the Athletic Grounds.

Cavan held on to survive a Monaghan comeback, reaching the semi-finals with a 1-13 to 0-13 win at Kingspan Breffni Park.

Finlay and Stephen Gollogly led the Farney fightback, but Terry Hyland’s men held on for a last-four meeting with Fermanagh on Wednesday.

Fermanagh clinched their semi-final place despite losing to Donegal by 0-12 to 2-05 at Ballyshannon.

Donegal were ahead by 0-10 to 0-03 at the interval, thanks to points from Daniel McLaughlin, Ryan Melly, Martin Reilly and Eoin McHugh.

The Erne men hit back with goals from Sean Quigley and Martin O’Brien, and came close to winning the game, missing a handful of late opportunities.

Derry went out of the competition, losing by 1-09 to 1-05 to Queen’s University at Greenlough.

Antrim’s Ryan Murray grabbed 1-02 to give the students a 1-06 to 0-04 interval lead, and despite the introduction of Eoin Bradley for his first appearance in over a year, the Oak Leafers could not claw back the deficit.

Niall Loughlin netted a late goal, but it was not enough to rescue the game for Brian McIver’s side. 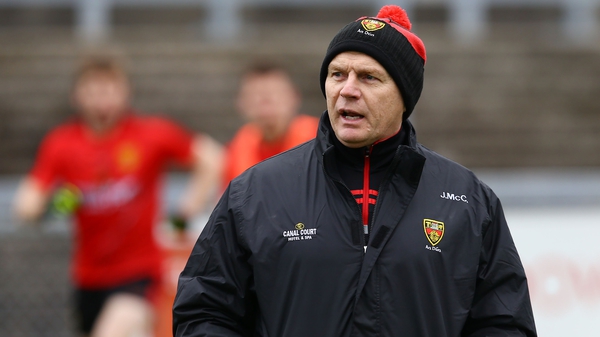