Rhode will play their fourth Leinster senior club final in nine years next month after they comfortably overcame the challenge of Kildare champions Moorefield by a score of 1-15 to 2-04 in O’Connor Park, Tullamore.

A goal from Anton Sullivan after nine minutes set the home side on their way as they completely overwhelmed Moorefield in the first half, eventually building up a 1-09 to 1-01 interval lead.

A penalty from Ronan Sweeney helped Moorefield to cut that gap to three points early in the second half, but Rhode dominated the final quarter and picked off five scores in succession with sharp counter-attacking play.

Despite the fact that one or both of these clubs have competed in nine of the last 11 Leinster senior club football championships, this was only the second meeting between these sides, coming eight years after two penalty goals from Ronan Sweeney helped Moorefield to a 3-06 to 0-08 win over Rhode in the 2006 decider.

Sweeney was on target from the spot again this afternoon and when his goal was followed up by a point from Niall Hurley-Lynch moments later, it looked as if the 2,985 supporters in attendance were poised to witness a thrilling finish as Rhode’s lead had been cut to just three points, 1-10 to 2-04.

However a couple of key wides cost Moorefield dearly and that was to be as close as they got to the victors before Rhode finally rediscovered their attacking rhythm in the final quarter, kick-started by a wonderful solo score from Niall McNamee.

Moorefield were left with little option but to push forward and chase goals in the closing stages and that played into Rhode’s hands as the Offaly side were simply outstanding on the break, moving out of defence at pace and picking off four scores to add real gloss to the scoreboard.

A similar late flourish gave Rhode a nine-point winning margin over Navan O’Mahonys in the previous tie but, while the Meath champions were very unlucky to lose so heavily, Moorefield could have no complaints here after losing out in almost every facet of general play.

Their greater power was expected to tell at midfield in particular but cousins Alan and Conor McNamee did well for Rhode here, while their half lines on either side of the jumpers were ravenous in the hunt for breaking ball.

The loss of captain and centre forward Paraic Sullivan to a straightforward black card seemed like a tough blow for Rhode after 15 minutes but the Offaly club never missed a beat in his absence as substitute Stephen Hannon matched Sullivan’s workrate and carried plenty of ball effectively at the heart of the Moorefield defence.

Rhode built up a 1-06 to 0-01 lead after 20 minutes and looked imperious during those opening exchanges, with Anton Sullivan central to all their best attacking play. 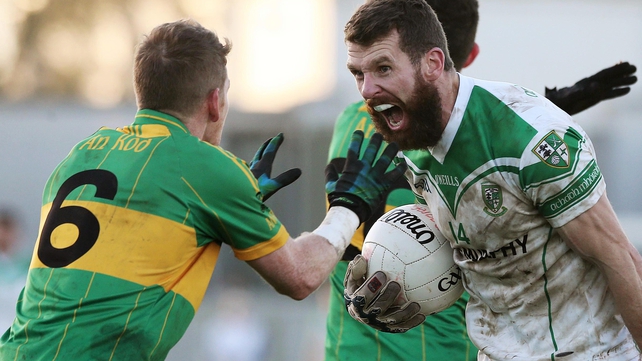 A scrappy goal for Adam Tyrrell, set up by an excellent turnover from Ciarán Kelly in the right corner, gave Moorefield a lifeline but they failed to seize their opportunity, instead coughing up three more points before half-time and failing to add another score of their own.

They did have a glorious opportunity shortly before half-time when Hurley-Lynch beat Alan McNamee and found himself one on one with Ken Garry in the Rhode goal, but the corner-forward delayed a fraction too long in picking his spot and while he did well to slip his effort underneath the Rhode keeper, he gave Ciarán Heavey enough time to get back on the line and make a last-ditch block.

The introduction of Daryl Flynn helped Moorefield to take control of the third quarter and a contentious penalty award in favour of Ronan Sweeney should have energised their push even further, but a couple of key wides cost them dearly and once Rhode came again in the fourth quarter, the Kildare champions had little or no resistance left, particularly once Ronan Sweeney was dismissed for a second yellow card late on. 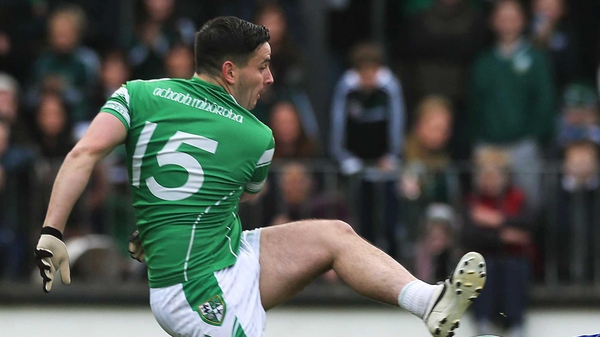