Kerry boss Eamonn Fitzmaurice said the experience of winning his first All-Ireland title as a manager was just as sweet as the three he won as a player.

“It is a lot harder on the sideline anyway,” he told RTÉ Sport. “I was a selector with Jack O’Connor in 2009 and it wasn’t a sweet as when I was a player but this is definitely as sweet as being a player.  Nothing can replace playing but this is a sweet one.”

Fitzmaurice revealed that Paul Geaney’s first-minute goal was the result of a deliberate tactic that paid off.

“You have to try and have a surprise or two up your sleeve on the day of a final,” Fitzmaurice.

“Paul Geaney is very strong over his head as well. We are fluid inside and that was a big thing that we worked on the last few weeks, not to be too predictable but still maintain our fluid game that’s got us here.

“Kieran [Donaghy] was outstanding as well, which was great.”

Fitzmaurice said a succession of second-half wides hadn’t made him nervous as he had told the players to shoot from distance.

“We were creating the chances,” he said. We knew from watching the [Donegal v] Dublin game that we would get chances from distance.

“We had agreed that we’d go for them and if we got them, we got them. If we missed them we weren’t going to be too worried about it.

“We knew it was going to be a very tight game and there wasn’t going to be much in it in the end. Thankfully we came out on the right side." 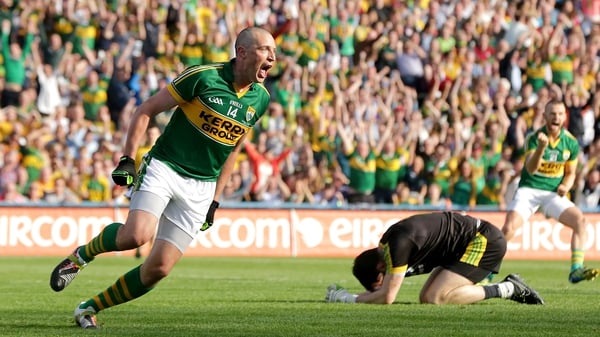