Two converted penalties from James O’Donoghue helped send Kerry into the All-Ireland senior football final after seeing off Mayo in a dramatic semi-final replay at the Gaelic Grounds in Limerick.

Mayo goalkeeper Rob Hennelly had a chance to win it for the Connacht champions with the final kick of normal time, but came up short with a last gasp free in the dying seconds of an epic encounter.

Kerry had recovered from being seven points down in the opening half to trail by a goal at the interval and it took a late point from Mayo wing-back Donal Vaughan to force extra time with the scores 3-11 each.

The sides were level at 3-13 apiece at the extra-time interval before Kerry pushed on to secure a place in the final.

Cillian O’Connor put James Horan's side ahead with a free in the first minute and Paul Geaney hit Kerry’s opener from a free moments later.

Kerry were winning the opening exchanges and O’Donoghue’s point extended their lead after 13 minutes.

However, Aidan O’Shea hit a high ball into O’Connor on the edge of the Kerry penalty area and when Shane Enright dragged him down, referee Cormac Reilly signalled for a penalty.

O’Connor slotted home the spotkick and a Mayo onslaught followed with O’Connor scoring 1-02 without reply.

Paul Geaney’s point stopped the rot for Kerry and moments later Kieran Donaghy found the net for the Kingdom.

Jason Doherty eventually got Mayo up and running again after barren period and then Killian Young, Doherty and another from Paul Geaney had Kerry ahead 2-05 to 1-05 at the break.

Alan Freeman came on to get Mayo’s first point from a free after half-time before Kerry regained the initiative, scoring 1-03 without reply which included O’Donoghue’s first penalty.

Andy Moran profited from a poor mistake from Kerry goalkeeper Barry Kelly to make it 3-07 to 2-09.

Doherty and O’Donoghue traded scores before O’Donoghue slotted his second penalty as Kerry went 3-11 to 3-09 in the lead before Mickey Conroy brought it back to a point.

Vaughan drew the teams level deep in injury time and Hennelly’s free landed short when he could have won it for Mayo with the last kick.

O’Connor and Kevin McLoughlin scored at the start of extra-time but that was it for Mayo as BJ Keane hit two frees to leave the teams level at the break, after which substitute Jonathan Lynne put Kerry in front before Paul Geaney and a second Lynne score sealed an All-Ireland final place for Eamonn Fitzmaurice’s side.

Further salt was rubbed into Mayo’s wounds as O’Connor saw red in the dying moments. 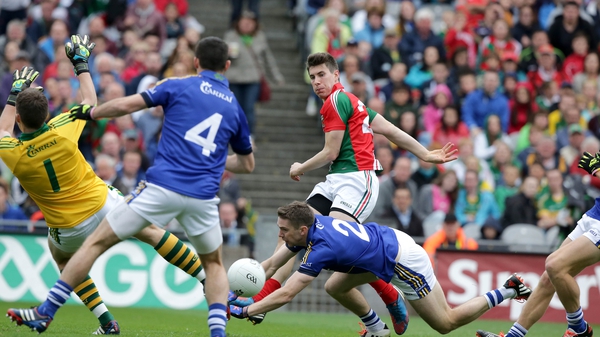