Kildare got out of jail against Clare at Cusack Park as Alan Smith kicked six points in a 0-13 to 0-12 qualifier win.

Clare led for most of the contest and a shock very much on the cards until the Lilywhites landed seven points without reply, including crucial scores from Eoghan O’Flaherty and Eamon Callaghan.

The Banner men tried desperately to draw level but could not penetrate the Kildare defence as their brave All-Ireland SFC campaign comes to an end.

Top scorer Smith proved key for Jason Ryan's side, with Kildare's experience and extra bit in the fitness tank enough to get them over the line.

In the opening half Enda Coughlan and Smith swapped early scores before 2013 Hurling All-Star Podge Collins split the posts to give Clare an early advantage in the Ennis sunshine.

Padraig O'Neill then levelled the game at 0-02 each before Rory Donnelly edged the hosts in front once more. The scores dried up during a ten-minute period in which Kildare duo Smith and O'Neill both collected yellow cards.

Emmet Bolton was lucky not to join his team-mates in referee Joe McQuillan's book following some heavy-handed clashes with Collins off the ball, with the Lillies clocking up six first half wides.

Kildare midfielder Tommy Moolick found himself on the end of a rare goal chance on the 20-minute mark but Clare goalkeeper Joe Hayes produced a fine save with Moolick slicing the rebound wide.

Clare were then lifted by a wonderful score from corner back Martin McMahon before David Tubridy dispatched the only score of the half from a free to give the hosts a three point cushion at 0-05 to 0-02.

Smith then fired over his second score of the game to end Kildare's astonishing 25-minute wait for a point, but
Banner midfielder Shane McGrath popped over a beauty at the other end almost immediately to cancel it out.

Kildare aimed to finish the first half strongly as Smith notched another late on, however McGrath again mustered the Clare response on the stroke of half-time to give Colm Collins' charges a 0-07 to 0-04 interval lead.

After the restart Kildare finally had an extra spring in their step as Smith added two more to his tally early on, but Clare were determined to pull off a scalp in front of over 7,000 spectators.

Three Tubridy scores from frees and a '45', coupled with a Gary Brennan score, gave them huge belief and a six-point cushion at 0-12 to 0-06 - but little did they know their scoring for the evening was over.

Kildare began to shut Clare out as their defence tightened up and their wide count stalled. A double from substitute Eoghan O'Flaherty and Smith's sixth of the game promptly brought them back within a goal.

Clare began to tire and the Lillies took full advantage. Paddy Brophy scored off the bench and Eamonn Callaghan finally got on the scoresheet with two crucial points to level the game, before Carbury clubman Flaherty sent over the match-winning point - with six minutes remaining - to break Clare hearts. 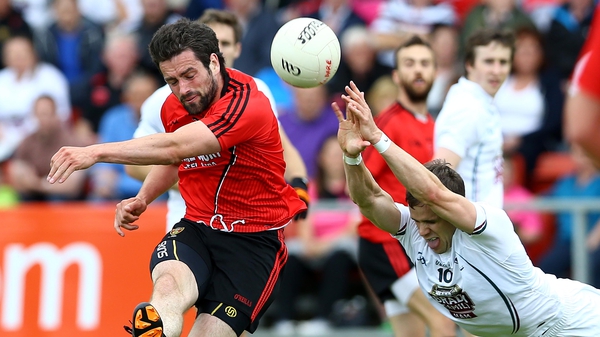