Kildare booked their place in Round 3B of the All-Ireland football qualifiers thanks to a 1-18 to 0-11 victory over Down in Newry.

Tommy Moolick's spectacular goal in the 69th minute put the finishing touches to a win for Jason Ryan's side who hit 1-16 of their total from play.

A Benny Coulter inspired Down fought back from a five point half-time deficit to twice draw level in the second half but Kildare were the strongest team in the last quarter.

The Lilywhites led by 0-08 to 0-03 at half-time but Down reeled off five points in a row in eight minutes to draw level, with Coulter scoring three of them.

Kildare hit the last 1-06 without reply, Tommy Moolick's goal from 25m out putting the gloss on a win for Kildare who lost to Meath in the Leinster semi-final.

There was a moment of controversy when Padraig Fogarty's effort, which looked clearly wide, was signalled as a point for Kildare when the game was in the melting pot.

It put the Lilywhites 0-13 to 0-11 ahead, and they kicked on strongly with Padraig O'Neill, Cathal McNally, Niall Kelly and Alan Smith tagging on excellent scores.

Kildare had the benefit of quite a strong breeze in the first half and kicked the opening two scores through Gary White and McNally inside four minutes.

Down levelled it up with two Donal O'Hare frees, but Kildare were the team in the ascendancy and scored an unanswered five points up to the half-hour mark. 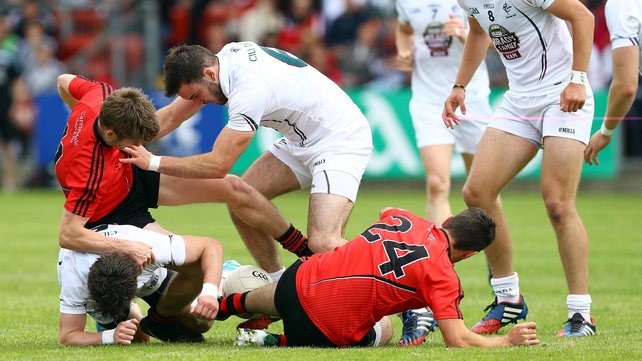 All their points in the first half were from play with Fogarty, Eamonn Callaghan and O'Neill (two) all scoring.

Callaghan received a black card for a high challenge on Mark Poland on 25 minutes. He was replaced by Alan Smith, who made an immediate impact with Kildare's seventh point after 30 minutes.

Down could not break down Kildare's rearguard and kicked a lot of possession away.

Coulter got their first and only point from play of the first half from close range in the 35th minute. It was Down’s first score in 26 minutes.

Eoghan O'Flaherty kicked the last point of the half to give the Lilywhites a commanding 0-08 to 0-03 lead at the break.

Coulter switched to full-forward at the start of the second half and kicked 0-03 in the opening eight minutes.

He and veteran midfielder Dan Gordon dragged Down back into the contest but they faded badly in the last quarter as Kildare kicked for home.

O'Neill's run set up Moolick for a spectacular strike across Down goalkeeper Michael Cunningham in the 69th minute to put the icing on the cake for Kildare. 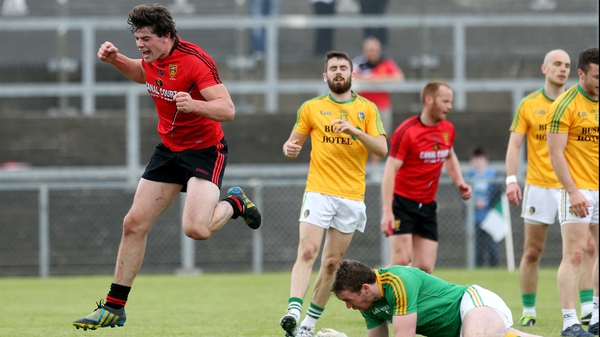