Defending champions Monaghan are through to an Ulster SFC final against Donegal following their 1-18 to 1-13 replay win over Armagh at Clones, with skipper Conor McManus hitting 1-07.

Aaron Findon grabbed an Armagh goal, but a 1-3 salvo from McManus sent the Farney men in with a 1-8 to 1-4 interval lead.

McManus and Paul Finlay struck accurately in the second half, and a four-point salvo from Jamie Clarke couldn’t save the Orchard men, who will now meet Tyrone in next weekend’s qualifier derby.

Darren Hughes recovered from a heavy knock to drive over two long range points as the Farney men eased ahead early on.

But Armagh struck for a goal in the 12th minute. Aidan Forker started the move in his own half, sprinting 80 metres to get on the end of an interchange between Jamie Clarke and Tony Kernan and smash a shot against the crossbar, with Aaron Findon finishing the rebound to the net from close range.

Monaghan’s response was defiant and decisive. They responded with five points on the spin to stamp their authority on the contest.

Paul Finlay knocked over a free, and goalkeeper Rory Beggan stepped up to stroke a 50-metre placed-ball between the uprights.

McManus swept over a couple of quality scores, and in the 32nd minute the All-Star attacker smashed home a brilliant goal, getting in behind marker James Morgan after a probing delivery from Kieran Hughes.

Armagh had gone 18 minutes without a score, unable to break the stranglehold held at the back by Dessie Mone, Drew Wylie and Colin Walshe.

Tony Kernan did steer over a couple of frees, and they had two penalty calls waved away by referee Marty Duffy when Mark Shields and Kieran Toner both went to ground.

Monaghan led by 1-8 to 1-4 at the interval, and stretched the advantage with scores from Stephen Gollogly, Beggan from a 53 metre free, and Dermot Malone.

Armagh hit back through Kernan and Clarke, but the Farney men build patiently, moving the ball laterally until the opening appeared for Finlay and McManus to pick up possession in the scoring zone and do what they do best.

When McManus fired over his sixth point in the 60th minute the Anglo-Celt Cup holders led by seven, and any prospects of another Armagh comeback appeared remote.

But Clarke began to find more space in a more advanced position and showcased his quality with a handful of quality scores.

Armagh suffered a blow in the 63rd minute when they were reduced to 14 men after Stefan Campbell was black-carded. They were unable to replace the wing-forward as they had used all six permitted subs.

It was show-time in the closing stages as McManus delighted the home fans with another delightful score from a sideline ball.

Armagh did battle to the end with scores from Kernan and Clarke, but they were a well beaten side on the day, out-played by an efficient Monaghan outfit.

They go forward to meet Donegal in a repeat of last year’s provincial decider, while Armagh head to Healy Park to face Tyrone.

Subs: A Mallon for Moriarty (BC), K Carragher for McVerry, S Harold for Toner, M Murray for Morgan, A Kernan for Donaghy, R Grugan for Forker 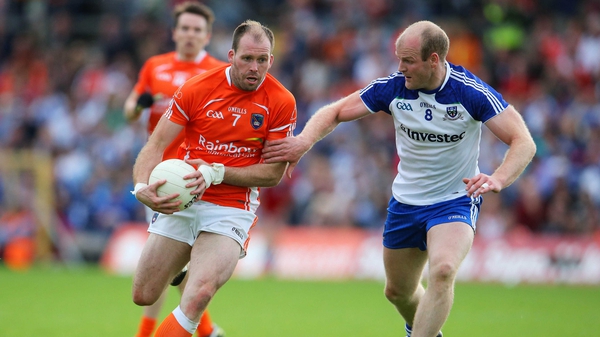