Substitute Rory Grugan converted a stoppage-time free to earn Armagh an Ulster SFC semi-final replay against Monaghan, tying it up at 0-14 each at Clones.

Monaghan goalkeeper Rory Beggan converted three frees, and made a vital save from Aidan Forker but Stefan Campbell’s leveller sent the sides in tied at 0-6 each at the break.

Stefan Forker brought Armagh level for the sixth time, but the Farney men powered ahead with points from Kieran Hughes, Beggan and Chris McGuinness, before the Orchard hit the game’s last three scores.

Jamie Clarke had Armagh ahead within 20 seconds of the throw-in, but the provincial champions hit the front through the accurate place kicking of Jack McCarron and Beggan.

But Clarke’s influence in front of goal waned once marker Colin Walshe got the measure of the Crossmaglen ace. However, he was supremely effective in a deeper role.

And it was the Farney goalkeeper who carried the greatest scoring threat, expertly steering over another couple of frees as Monaghan moved into a 0-6 to 0-3 lead by the 23rd minute.

Kieran Hughes and Conor McManus, with a gem, were also on target for Malachy O’Rourke’s side, with Stefan Campbell and wing-back Mark Shields hitting the target for an Armagh team which was determined and competitive despite the failure of their DRA appeal over the suspension of three key players.

Armagh lost attacker Kyle Carragher to a black card, but his replacement Tony Kernan had an immediate impact, slotting over a free and sending Aidan Forker in on goal, only for Beggan to smother the shot.

Ciaran McKeever made a surge from the back to set up Forker for a point and Campbell, who rounded off a sweeping move to bring the sides level on 0-6 each in stoppage time.

Clarke and McManus traded scores early in the second half, and with Dick Clerkin raising his game around the middle, Monaghan began to squeeze their opponents.

Clerkin sent substitute Stephen Gollogly in for a point, but they suffered a huge blow when captain and top attacker Conor McManus saw his game ended by a black card for a 43rd-minute challenge on Finian Moriarty.

The sides traded point for point, with Dick Clerkin and Stephen Gollogly on target for Monaghan.

Kevin Dyas, a creative influence all evening, showed his finishing skills as well, and Stefan Forker, on as a sub for his brother Aidan, bringing the sides level for the sixth time.

But Clerkin and Darren Hughes stamped their authority on the midfield battle, driving their side forward, and they appeared to have seen off the Armagh challenge when they hit three points on the spin to go ahead six minutes from the end.

Kieran Hughes, and Beggan again, with his fifth, made it 0-14 to 0-11, and Monaghan fans were singing in the sunshine at St Tiernach’s Park.

However, Armagh had their own inspirational leaders in Ciaran McKeever and Charlie Vernon, and they deservedly got their reward.

Clarke angled over another delightful score, Stefan Campbell claimed his third, and it was Grugan who won and converted the stoppage time free that earned the Orchard a second chance. 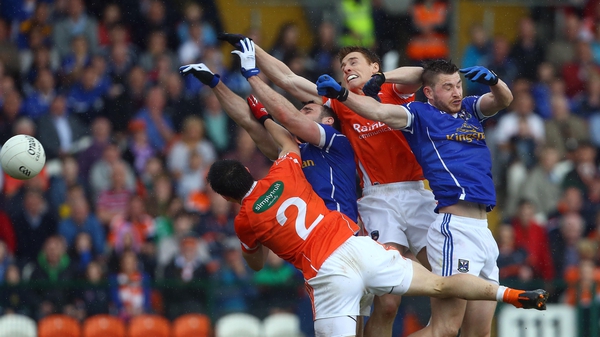