Armagh put their relegation woes behind them to easily overcome Cavan by 1-12 to 0-09 in the Ulster SFC quarter-final at the Athletic Grounds.

Armagh dominated the first half, and three Jamie Clarke points helped them to a 0-05 to 0-o2 interval lead.

Caolan Rafferty smashed home an Armagh goal on 53 minutes, Aaron Kernan came off the bench to shoot three points, and Clarke finished with four to his name.

A mass brawl kicked off as the players assembled for the pre-match parade, delaying the start by five minutes.

Two Eugene Keating frees eased Cavan into an early lead, but Armagh could have had a goal when Eugene McVerry pulled the ball back for Stefan Campbell, but his hurried effort spun wide.

Jamie Clarke got Armagh off the mark in the ninth minute, and the sides were tied at two pons tech at the end of a defensive, low-scoring opening quarter, after Eugene McVerry nailed a free.

Ciaran McKeever and Andy Mallon availed of every possible opportunity to push forward from the back, but they were never short-handed in defence, repeatedly frustrating the Breffni men as they searched for a way to play their way through waves of orange-clad bodies.

Cavan moved David Givney from full forward to midfield in an attempt to break the dominance of Kieran Toner and Aaron Findon, but they just couldn’t find the spark that would surely have been provided by Ciaan Mackey, unable to start due to injury.

Cavan failed to score for the 31 minutes that preceded half-time, while the Orchard men, despite kicking 11 wides, pushed into a 0-5 to 0-2 lead, with Clarke converting a couple of frees.

Mackey was one of three players sprung from the bench at half-time, but it was an experienced Armagh substitute, Aaron Kernan, who popped up on the end of a move involving McKeever and McVerry to punch over the points that made it 0-8 to 0-2 ten minutes into the second half.

Cavan finally began to move with some purpose, and David Givney ended a 40-minute barren spell with their first score from play.

They scored three on the spin, with Gearoid McKiernan, Givney again, and corner back Feargal Flanagan all on target.

But Armagh struck gold in the 53rd minute, Caolan Rafferty latching on to Clarke’s dropping delivery to rifle the ball to the net from a tight angle.

Cavan failed to muster a response of any significance, and it was Armagh who threatened to land further major blows,  but goalkeeper Conor Gilsenan saved from Clarke and Kernan.

McKiernan and Mackey landed Breffni points, but, trailing by five going into the final five minutes, they badly needed a goal.

James Morgan and Brendan Donaghy dictated that the line would not be breached, and the Orchard survived with a measure of comfort.

Armagh attacker Ethan Rafferty, who had been booked, saw black, followed by red. 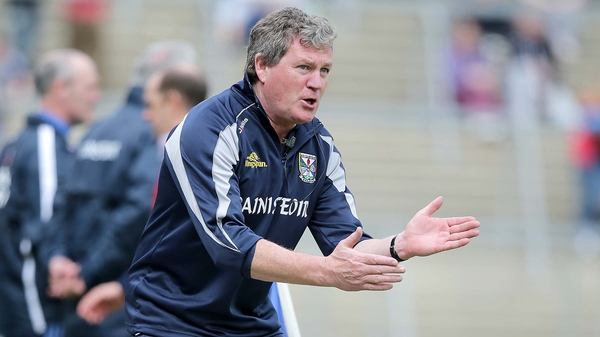