Cavan boss Terry Hyland worries that the phrase 'choke tackling' is imprecise and troublesome for players, coaches and referees.

The term, which has been borrowed from rugby, describes a play where one or two players surround and 'wrap' an opponent in order to create pressure and release the ball.

Pundits have began to speculate on the emergence of the penalty, specifically during the recent Ulster Football Championship where Donegal players were said to have committed the offence in their win over Derry.

Earlier in the year, Louth boss Aidan O'Rourke also claimed that Dublin used the technique in order to avoid black cards during play.

Hyland rejects the hype surrounding the buzzy phrase and asserts that its dramatic language does not match the actual gameplay.

"The terminology of the word 'choke' suggests that you're catching somebody round the throat. I didn't see anybody being caught round the throat in Derry," he told the Irish Examiner.

"When a player is surrounded, it's this terminology the 'choke tackle' that's being used. But it's really just standing them up. If you've been at schoolboy games for the last 10 years, you'll hear all the coaches shouting, 'stand them up, stand them up,'" he said.

Hyland fears that the newly-emerging terminology will harm the game's reputation and cause an increase in unnecessary penalty calls.

"This is where you would worry a bit about the commentary, that the referees don't suddenly start panicking and saying, 'uh oh, we need to be handing out more cards,'" he said.

In order to compensate for a number of questionable calls in Ulster Championship games, Hyland says that referees might hone in on 'choke tackling' penalties going forward.

Ahead of Cavan's provincial opener against Armagh on Sunday, he urged refs to dismiss outside pressure to increase their black card count.

"We have to be very careful that the terminology doesn't translate back down onto the pitch and cause a negative impact," he said. 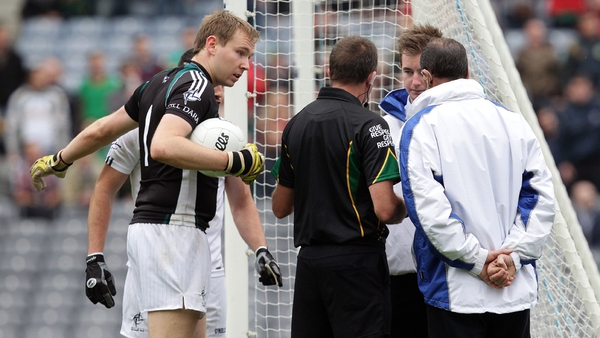