Alan Freeman was the star of the show as Mayo booked a place in the Allianz Football League semi-finals following a 2-12 to 1-07 win over Derry at McHale Park, Castlebar.

With Freeman prominent, Mayo bossed the first half and were 0-08 to 0-01 ahead at the break as a revamped Derry outfit struggled.

Freeman goaled a 40th-minute penalty and from then to the finish all that needed to be determined was how much Mayo's winning margin would be.

Derry were spirited and managed a delightful 51st -minute major from Emmett McGuckin, but Freeman responded with an equally tidy finish on 57.

Despite a swirling wind, Mayo were still able to play a decent brand of football as James Horan's charges ruled the opening period.

Derry, already through to the penultimate stage, made 14 changes to the team which defeated Kildare and they ruthlessly dismantled by Mayo initially.

When Derry got into the scoring zone their shot selection was poor and while Mayo missed a couple of gilt edged goal opportunities they were still vastly superior.

A 21-minute search for a Derry point was eventually ended when Aidan McAlynn finished a sweeping move impressively.

But it was merely a brief interuption to Mayo's dominance as the Green and Red were dictating the pace of this contest.

Further scores before the break from Tom Parsons, Freeman, and Sweeney ensured Mayo's half-time cushion was a significant seven points.

McGuckin trimmed the deficit immediately after the restart, but then Mayo struck for goal.

Conor McAtamney's foul on Freeman ensured a penalty was awarded and the full forward converted expertly.

Mayo were subdued for a spell and Derry profited as replacements Aaron Kerrigan and Emmett Bradley hit points.

In the 51st minute McGuckin dashed through to blast a brilliant goal and a point from Charlie Kielt had the gap down to 1-08 to 1-05.

Mayo remained cool and composed, however, as Freeman supplied an immaculate finish as the insurance goal was registered  in the 57th minute. 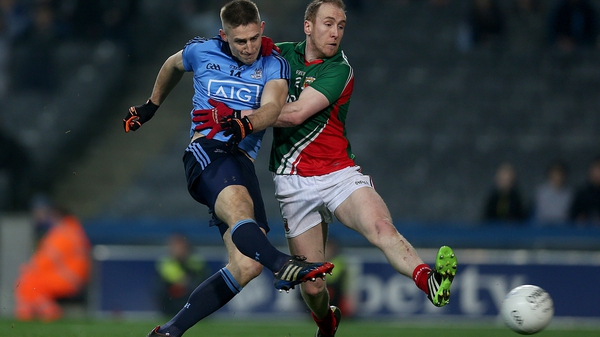