Cavan and Tyrone will face off in next Saturday's Power NI Dr. McKenna Cup Final at Brewster Park after semi-final wins over Monaghan and Derry today.

The decider will be a repeat of the 2000 decider, which Cavan won, the last time the Breffni County contested the decider of the Ulster pre-season Football competition.

2284 watched on as Terry Hyland's side overcame local rivals Monaghan by 0-16 to 1-09 at Enniskillen this afternoon.

Monaghan were on the front foot early on thanks to a fifth minute Dermot Malone goal, after a long pass from Conor Boyle.

Monaghan led by 1-03 to 0-03 at the end of the opening quarter, but Cavan rallied with four unanswered points, with Philly Tinnelly, Turloc Mooney and Eugene Keating on target to move one point clear, six minutes from the break.

Jack McCarron drew level for Monaghan, but scores from Niall McDermott and Keating helped Cavan to a 0-09 to 1-05 interval lead.

Keating's fourth point opened up a two-point gap on the restart, and although Monaghan drew level through Chris McGuinness and Dermot Malone scores, Cavan regained the lead through Michael Lyng two minutes later and never looked back.

Tyrone led by 1-06 to 0-05 at half-time, with the opening goal of the opening half coming from Queens University student Niall McKenna after just 15 seconds.

Darren McCarry and Connor McAliskey had helped open up a seven-point lead, but scores from Gerard O'Kane, Ciaran McGoldrick and Declan Mullen cut the gap at the interval.

The Oak Leafers worked hard for a goal, and after three earlier misses they finally registered a goal flag six minutes from the end, with Emmet McGuckin on target, and despite a late Mark Lynch point, Tyrone held out for a three-point win.

The final will be at 7:30pm in Enniskillen. 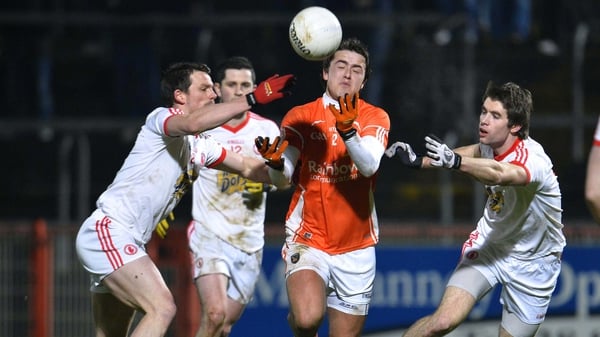