Tyrone will face Derry and Monaghan will take on Cavan in the semi-finals of the Power NI Dr McKenna Cup, following the final round of group-stages games in Ulster.

At Healy Park in Omagh, Tyrone were ruthless as they powered to a 5-16 to 0-07 win over Armagh to maintain their unbeaten start to 2014.

Eleven of the hosts' 15 starters were on target for Mickey Harte's side, who led by 2-10 to 0-04 at half-time, with Ciaran McGinley and Mattie Donnelly registering first-half goals in an eight-minute spell at the start of the second quarter.

Peter Harte netted a 44th-minute penalty, while Coalisland clubman Lavery, registered his second goal of the night and third goal of the campaign to date late on, on the way to a 24-point win.

Also in Section B, Donegal claimed a comfortable 3-16 to 3-05 win over Queen's University at MacCumhaill Park, but failed to qualify for the semi-finals as the best runner-up.

Michael Murphy, Colm McFadden and Rory Kavanagh delivered the goals for the hosts.

Ryan Rafferty (3-01) bagged a hat-trick of goals for the students, including two in the opening period, with Murphy netting a late first-half goal.

Rafferty completed his hat-trick four minutes after the restart to cut the gap to two points, but Donegal finished strongly, with McFadden's goal killing off hopes of a Queen’s revival.

Kavanagh's goal came in the closing stages, soon after he was sprung from the bench.

Anthony O'Neill top-scored with 1-03 for Derry as the Oak Leafers claimed a 1-17 to 0-14 win over St Mary's University Belfast in Section B to book a semi-final date with Tyrone in Omagh.

Claudy clubman Aaron Kerrigan was also in superb form under the Owenbeg floodlights, scoring 0-05, with the 23-year old also aiding O'Neill to bag the only goal of the game in the 28th minute to put the hosts in front.

St Mary's started this game strongly and raced to a 0-05 to 0-02 lead at the end of the opening quarter, with Peter Carragher and Thomas Canavan among the early scorers for the students.

O'Neill's goal handed Derry a 1-04 to 0-06 lead approaching the break, with two points from Kerrigan and another from Niall McFeely ensuring Derry led by 1-07 to 0-07 at half-time.

The sides were tight throughout the third quarter, with Fermanagh's Richard O'Callaghan and Canavan cutting the gap to a point at 1-09 to 0-11 with 20 minutes remaining.

However, the introduction of the experienced Mark Lynch and Patsy Bradley saw Derry begin to pull away, with O'Neill, Gerard O'Kane, Enda Lynn, Ciaran McFail, Lynch and Kerrrigan seeing Derry home to a six-point win in the final quarter.

Reigning Ulster champions Monaghan booked their place in the semi-finals thanks to having the best scoring difference of the runner-up teams, following their 2-20 to 0-11 win over Fermanagh at Brewster Park.

Paul Finlay scored his 500th point for Malachy O'Rourke's side as they booked a last-four encounter against neighbours Cavan.

Carey's goal proved the difference after 15 minutes as Monaghan led on a 1-05 to 0-05 scoreline.

Brothers Seamus and Sean Quigley tried hard to keep Fermanagh in touch, but Monaghan stormed to a six-point interval lead, with Finlay and Thomas Kerr on target.

The Oriel County were ruthless on the restart, doubling their tally and holding Fermanagh to just four second-half points.

Despite this, Fermanagh looked hungry in the opening stages of the second half, but Monaghan keeper Damien Lavelle denied Sean Quigley early after the restart.

Finlay's milestone score came to put Monaghan 1-16 to 0-08 ahead, with Christopher McGuinness netting the visitors’ second goal soon after to pave the way for a 15-point win.

Antrim achieved a notable 1-12 to 0-10 win over a dismal Down in Section C, but missed out on a semi-final berth.

Down rallied after the restart, cutting the deficit to just three points thanks to contributions from Liam Doyle, Niall Madine and Darragh O'Hanlon.

However, Antrim maintained their composure, with Mark Sweeney, Brian Neeson and CJ McGourty all registering points en route to victory.,

UUJ conceded their match against Cavan, who were already virtually assured of progress to the last four, due to the unavailability of a large number of players. 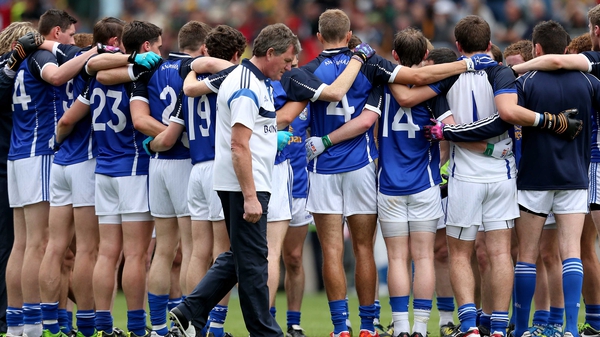