Read RTÉ.ie/sport's Kerry v Tyrone minute-by-minute text matchtracker, which followed (well, tried to!) all the action as it happened at Croke Park today. Read from the bottom up.

Read your comments from before, during and after the game.

Seemingly dead and buried after their defeat to Down in the quarter-final of the Ulster Championship, Tyrone have become worthy champions after a stirring performance against three-in-a-row chasing Kerry this afternoon. Resilient in defence, committed in midfield and ruthless in attack, Tyrone scored the last five points of the game to banish any doubt that Mickey Harte's men were not capable of a serious All-Ireland challenge after previous successes in 2003 and 2005. However, the 2008 vintage are worthy of their place in the annals of Tyrone and indeed GAA history after this exceptional performance against a Kerry side who at times looked set to add to their 35 titles, with Cooper and Darragh Ó Sé particularly impressive. But alas, there can be only one winner, and in players like the sublime Sean Cavanagh, the dynamic Brian Dooher, and the impenetrable Pascal McConnell this Tyrone side are deserved victors and fine champions. Tyrone, we salute you!

FULL-TIME: Kerry 0-14 Tyrone 1-15
And sure enough, Tyrone are champions after a thrilling and frantic finale, scoring four points without reply from the 64th minute to deservedly deny Kerry the three-in-a-row. Well done Tyrone.

70 mins Kevin Hughes points and from the resulting kick-out Colm Cavanagh points to extend Tyrone's lead to four points. It's hard to keep up with this but surely it's theirs now? 0-14 to 1-15

69 mins Dooher puts Enda McGinley through on goal and the Errigal Ciaran man slots over. 0-14 to 1-13

66 mins Declan O'Sullivan's goal-bound shot is superbly saved by the feet of O'Connell and Tyrone breath a sigh of relief.

65 mins Five minutes to go and it's still neck and neck. Could we have a repeat of the minor match and see the game go to a replay? Let's hope not, I've holidays booked to Chicago next Sunday!

65 mins Galvin is booked for a high tackle on Jordan.

64 mins Cavanagh kicks his fifth point of the day after being teed up by Brian McGuigan to put Tyrone in front once more. 0-14 to 1-12

Your view: Many thanks for updates and build up. You saved my day after Setanta Africa once again let us down in this part of the world. Looking forward to a good second half. Best wishes, Tony Dolan, Kenya Highlands

59 mins Galvin is introduced for Tommy Walsh and receives an excellent reception from the Kerry fans. Will he be the man to lift Kerry's spirits and drive them on to the three-in-a-row?

58 mins Mulligan immediately sets up Cavanagh for a booming point for their first score in 13 minutes. 0-14 to 1-11

58 mins Owen Mulligan comes on for Mellon as Paul Galvin readies himself on the sideline.

57 mins A quick free from Cooper into Donaghy sees the Austin Stacks man return the ball to Cooper and the Dr Crokes man scores a stunning point to put Kerry in front. 0-14 to 1-10

55 mins Darragh Ó Sé points after Cooper did brilliantly to maintain possession and find him. The sides are level once again. 0-13 to 1-10

53 mins Griffin is immediately involved as he recklessly challenges Joe McMahon, 'clothes-lining' him as Martin Carney suggests. He is shown the yellow card.

52 mins A change on both sides as Brian McGuigan comes on for Penrose and Tommy Griffin replaces Seamus Scanlon.

49 mins Tomas Ó Sé drives up from the back to get his name on the scoresheet again with one of his now trademark forays forward. 0-12 to 1-10

47 mins Darren O'Sullivan finds Cooper and the lively forward slots over right-footed. 0-11 to 1-10

46 mins Cavanagh gets his third of the day after combining well with Philip Jordan and cleverly taking a fisted point with Murphy coming off his line. 0-10 to 1-10

45 mins Walsh turns and races clear of Joe McMahon and keeps his composure to fist another fine point for Kerry. 0-10 to 1-09

43 mins O'Sullivan makes an immediate impact, latching on to a pass from Walsh and pointing superbly. 0-09 to 1-08

At half-time Colm O'Rourke said 'Kerry are gonna have to dig out a win here' and that certainly looks to be the case now. Joe Brolly added: 'Tyrone are a second half team and Kerry already look tired.'

40 mins Sheehan hits Kerry's seventh wide of the afternoon from a 50m free.

36 mins GOAL! Tyrone get the perfect start to the second half, just 22 seconds in Stephen O'Neill fists a superb ball into substitute Hughes and his shot is smothered by Murphy and Tommy McGuigan follows up to tap the ball into the empty net. 0-08 to 1-07

Tyrone's Kevin Hughes on for Collie Holmes at half-time.

HALF-TIME: Kerry 0-08 Tyrone 0-07
There's very little between the sides at half-time after an absorbing first half. Kerry lead by a solitary point but the game is finely balanced, and you'd imagine it is going to take a moment of individual brilliance or perhaps a significant mistake to give either side a telling advantage. Somehow, the clouds have dispersed and the rain I so prophetically predicted before the match is, thankfully, nowhere to be seen. Let's hope the second half provides us with some brighter moments on the pitch and that these two great sides produce the kind of quality football they have become synonymous with over the past five or six years.

35+2 Laois man Deegan has a busy few minutes at the end of the half, with Darragh Ó Sé booked for an elbow on the grounded Cavanagh, which prompted a minor melee amongst both sets of players. An official or spectator also appeared to be knocked over in the ensuing drama.

35+1 mins Aidan O'Mahony is booked a minute later for a needless shove on Cavanagh in front of the referee.

33 mins Marty confirms from the sideline that Kerry manager Pat O'Shea has directed Donaghy to switch to midfield in an attempt to restrict Tyrone's marginal dominance in that pivotal area.

32 mins Both sides squander chances, with Tommy McGuigan driving a free wide at one end and Eoin Brosnan drilling a decent shot from play narrowly wide at the other.

30 mins Sheehan shows his class with a second pointed free, from about 50 metres on this occasion. We're level again. This really is nip and tuck stuff so far between two very evenly matched sides. 0-07 to 0-07

27 mins Martin Penrose points with ease after he found acres of space in front of the posts. Perhaps he could have driven on and tried for more than the point? Time will tell if that was the right decision. 0-06 to 0-07

25 mins The mercurial Stephen O'Neill is introduced for the injured Colm McCullagh.

24 mins Captain Brian Dooher points right-footed from distance for the score of the game less than a minute after Pascal McConnell produced an excellent stop at the other end to deny Tommy Walsh. 0-06 to 0-06

23 mins Declan O'Sullivan produces a terrific block on Cavanagh, reminiscent of Conor Gormley's in 2003, and a good Tyrone attack is cleared.

22 mins Bryan Sheehan points from a close-range free after Donaghy was fouled. 0-06 to 0-05

21 mins RTÉ co-commentator Martin Carney points out that Kieran Donaghy and Tommy Walsh, until now relatively starved of quality ball, are now out at midfield looking for more of the action.

20 mins Declan O'Sullivan collects the ball around the half-forward line and leaves his marker Philip Jordan for dead before clipping over left-footed from about 20 metres. Fine individual score. 0-05 to 0-05

18 mins Cavanagh adds a second within a minute, again getting the better of Tom O'Sullivan to get a sight of the posts and he cleanly fists over to put Tyrone in front again. 0-04 to 0-05

17 mins Ó Sé is penalised for over-carrying and the quick free finds Cavanagh in space and he makes no mistake to curl over a fine score and restore parity. 0-04 to 0-04

14 mins Paul Galvin is caught by the RTÉ camera warming up. Will we see him at some stage?

13 mins The marauding Darragh Ó Sé, belying his age, combines brilliantly with Declan O'Sullivan, who calmly points for one of the scores of the game thus far. 0-04 to 0-03

12 mins Cooper draws Kerry level again after another foul, this time by Collie Holmes on Killian Young, gives Deegan no choice but to award the free. 0-03 to 0-03

11 mins Wing-back Davy Harte strides forward, collects the ball inside the Kerry half and slots over superbly. 0-02 to 0-03

9 mins Declan O'Sullivan registers Kerry's third wide of the opening ten minutes after a probing burst forward on the left.

5 mins Sean Cavanagh drops a free short under the crossbar but goalkeeper Diarmuid Murphy gathers confidently and clears. Kerry in possession seem to be hitting a lot of diagonal balls once they get past the midfield mark.

4 mins Conor Gormley seems to be marking Cooper, while Joe McMahon looks like he's gone in to the full-back line.

2 mins Darragh Ó Sé fields the ball brilliantly from the kick-out, finds Colm Cooper with an excellent diagonal ball and the Dr Crokes forward splits the posts with his traditional accuracy. 0-01 to 0-01

1 min Tyrone are attacking the Hill 16 end and immediately they win possession from referee Maurice Deegan's throw-in. Darragh Ó Sé fouls and Colm McCullough slots over with ease to give Tyrone the early advantage. 0-00 to 0-01

3.30pm Good to see a friend of mine getting things underway, my Sligo compatriot Elaine Canning belting out a glorious rendition of Amhrán na bhFiann.

3.28pm The players are finished with the formalities and the pre-match parade behind the Artane Band, and are now standing for a minute's silence for John Devine. RIP.

Send us your thoughts throughout the match by text or by using our comment tool here.

3.10pm Brian Dooher leads out the Tyrone team, some of them bearded, some of them not, but all of them full of intent to secure the county's third All-Ireland SFC title in six years. The players are wearing black armbands as a mark of respect to John Devine Senior, father of goalkeeper John, who passed away on Saturday.

3.04pm The Kerry team take to the pitch for their pre-match warm-up looking keen, focused and hungry.

2.55pm There are two late changes to the Tyrone starting XV, with Martin Penrose coming in for Brian McGuigan and Ryan Mellon replacing Ciaran Gourley. Marty Morrissey, pitchside, informs us that Mickey Harte said this was a 'tactical' move, and was not dictated by anything other than tactics.

2.49pm I've just come back from the canteen (a man's got to maintain his energies, big day ahead!) and was surprised to see the morning's azure blue skies replaced by the more familiar grey hue we are used. I'm no weatherman, but I'd be surprised if the rain stays off for the next two hours, while I think there could also be a risk of thunder. Let's hope not.

2.46pm The Minor final has just finished with Tyrone securing a 0-14 to 0-14 draw with Mayo with virtually the last kick of the game.

2.10pm The teams have just arrived at Croke Park ahead of the 3.30pm throw-in, and the big news today is that Tyrone will start with Pascal McConnell in goals after John Devine's father passed away on Saturday.

This is how the teams were selected during the week, McConnell's inclusion aside, but if there is any further change before throw-in we'll keep you informed. 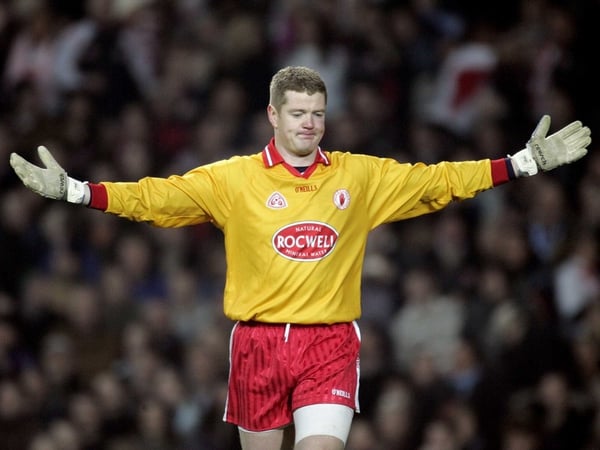