Giving an exhibition of shooting and wet-weather football, All-Ireland champions Kerry saw off Galway in what turned out to be the first ever floodlit Championship match at Croke Park.

A second half goal from substitute Joe Bergin edged Galway into the lead and threatened to derail the Kingdom's three-in-a-row hopes.

But despite a scoring blitz from Galway's Michael Meehan, who scored ten points in all, Kerry's class shone through in the dark and miserable conditions.

Kerry had led 1-08 to 0-09 at half-time, thanks to a 19th-minute goal from Donnacha Walsh and impressive points from Bryan Sheehan, Declan O'Sullivan and Tommy Walsh.

Playing in their eighth successive All-Ireland quarter-final, Kerry got a pre-match boost when influential centre-back Aidan O'Mahony was passed fit to start.

O'Mahony injured his Achilles tendon in last Sunday's qualifier victory over Monaghan, but the Rathmore clubman had a quicker than expected recovery and enjoyed a tremendous duel with Galway captain Padraig Joyce this afternoon.

The Tribesmen included youngsters Mark Lydon and Paul Conroy for their first trip to Croke Park this year after both made an impression as substitutes in last month's Connacht final win over Mayo.

This game really was a throw-back to Gaelic football's 'good' old days when the skills of kick-passing, high fielding and dead-eye shooting were de rigeur - and positional switches were unheard of.

36,771 spectators made their way to GAA Headquarters for today's football double-header and despite the unseasonal weather, they were treated to two high quality encounters.

At the start of the second game, Galway looked promising as Michael Meehan hit four points in quick succession, responding to a second-minute effort from Tommy Walsh.

Livewire Meehan was causing great concern for his marker Marc Ó Sé, the 2007 Footballer of the Year. The Kerry management switched Tom O'Sullivan onto the Caltra clubman but he fared little better than his predecessor.

But Kerry overcame that sticky patch and began to motor, albeit with star forwards Kieran Donaghy and Colm Cooper kept relatively quiet.

Declan O'Sullivan, their All-Ireland-winning captain, really stepped up to the plate with a fine display of score-taking.

Just back from injury, O'Sullivan was rather harshly criticised by some pundits for failing to make his mark on the Monaghan game last time out.

After a pointed free from Bryan Sheehan, O'Sullivan landed Kerry's third point after linking with Tommy Walsh and he repeated the trick in the 17th minute, this time from a tight angle on the left, to draw Kerry level.

Then came the goal, which crowned a scoring spurt of 1-04 in six minutes for the defending champions.

The move began with stand-in captain Tomás Ó Sé as he burst forward and passed to the ever-alert Donaghy, whose timely hand-pass sent Donnacha Walsh surging towards the Galway goal.

The Cromane attacker made no mistake as he rasped the ball past stranded goalkeeper Paul Doherty, and Tommy Walsh tagged on a subsequent point to add to Kerry's growing lead.

As the rain began to teem down, Meehan just about kept Galway in the hunt. Indeed, the former All-Ireland Under-21 winner was Galway's sole scorer until midfielder Lydon pointed in the 33rd minute.

Sheehan replied with a free of his own and Declan O'Sullivan kept Kerry ticking with another fine point and he was unfortunate not to follow up with a goal when he sped through and thundered a rocket of a shot off Doherty's right upright.

Tommy Walsh's third point of the half took his side's tally to 1-08, and while Lydon and Cormac Bane registered late points, Kerry were still deservedly ahead at the interval, 1-08 to 0-09.

The fading light, even at a quarter-to-five on a summer's day, meant Croke Park chiefs had to switch on the floodlights for the second half, after getting the thumbs up from both camps.

Pat O'Shea's charges could and perhaps should have nipped in for a quick goal on the restart.

Cooper and Donaghy worked their way through the Galway defence and with the goal coming into view, Cooper's pass to Donaghy was fisted over the crossbar by the Tralee giant.

Meehan continued to take the fight to the champions and his elusive running and expert shot selection led to two more points for his individual collection.

A Sheehan free took the pressure off the Kerry defence but Galway then struck for their goal when, on 41 minutes into the game, the slightly subdued Padraig Joyce lobbed a high free into the danger zone.

Bergin, back after Achilles tendon and quad muscle injuries, was first to it as he gleefully punched the ball straight to the net.

Marc Ó Sé and goalkeeper Diarmuid Murphy were really caught out as their decisions to go out of position and challenge Bergin for the high ball backfired badly.

Galway had suddenly crept ahead in the worsening conditions. A point from defender Garreth Bradshaw soon added to Kerry's woe and now they were two points in arrears.

After a pointed free from Cooper, Meehan could have really piled the pressure on Kerry when he was presented with a gilt-edged goal chance.

The full-forward agonisingly lost control of the ball as he sought to pull the trigger and net minder Murphy was able to parry. However, Bergin did finish the attack with a point.

Another goal chance came and went for the Tribesmen when Meehan teed up Bane, but the latter's shot was well blocked by Marc Ó Sé.

With the Kerry defence regaining their poise and top scorer Sheehan continuing to show unerring accuracy from frees, a brilliant late surge was enough to see the green and gold over the rain-soaked finishing line.

O'Shea's men outscored Galway by eight points to three over the closing quarter-hour for a real statement of intent - this is Kerry's trophy and Sam Maguire will soon have a residency in Killarney.

Cooper got his side back on terms with a well-crafted point and O'Sullivan followed suit as Kerry ominously went back in front.

With Darragh Ó Sé and Seamus Scanlon beginning to boss the middle, further points from Sheehan, Cooper and Aidan O'Mahony left three between the sides.

Galway were able to respond with late efforts from Joyce (62 minutes), Meehan (67) and Matthew Clancy (injury-time), but Kerry had turned the screw and in some style.

O'Sullivan took his personal haul to four points from play, Sheehan then topped up his tally with two more blockbusters and Darragh Ó Sé claimed a deserved point in injury-time. It was clinical, almost effortless and unmistakeably Kerry. 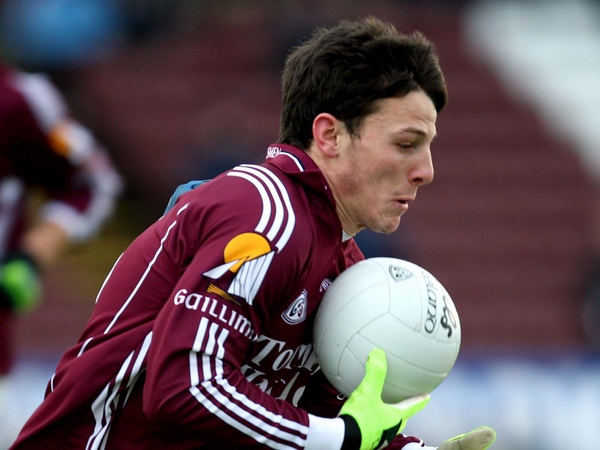