Gareth Southgate insists he is being realistic about the expectations he can put on the young and inexperienced members of his England squad.

There was a clamour for Jack Grealish to come off the bench in Friday's goalless Group D draw with Scotland, with many feeling the Aston Villa captain should be a starter for the Three Lions.

Similarly, Jadon Sancho is yet to play a single minute at Euro 2020 and did not even make the bench for the opening win over Croatia.

Bukayo Saka has also yet to feature, while fellow teenager Jude Bellingham was a late substitute in the first game.

Asked specifically about Sancho being involved in Tuesday’s clash with the Czech Republic, Southgate replied: "We’ve got some explosive options and a lot of them are young players and experiencing a big tournament for the first time.

"So as a coaching staff we are realistic about our expectations of them as individuals.

"Jadon is in that mix. He's trained well the last few days and of course we have got those options and those decisions to make."

Kane has struggled to make an impact so far in the competition, with Sterling's winner against Croatia the only goal England have managed across 180 minutes.

Southgate believes the fact he did not have a full squad for the two warm-up games and the start of preparations for the tournament could have had an impact on the collective performance at the top end of the pitch.

Sterling, Phil Foden and Mason Mount were all given extended breaks following their Champions League final exploits, while Marcus Rashford was unavailable to link up immediately having played in the Europa League final for Manchester United.

"We’ve got to just keep working on that. We know there are some very good players in there, we know they can perform better than they did (against Scotland) and we’ve got to help them to find that level.

"The important thing is that everyone gets behind the team and the players and they’re going to need to feel that support and to feel that warmth."

"This is a relatively inexperienced group, I think the third least caps in the tournament. Against Scotland it was a young team so that’s a different experience for a lot of them than they’ve ever faced before.

"They’ve just about survived it. We want to be better and that’s what we’re going to work through in the next few days before we play the Czech Republic." 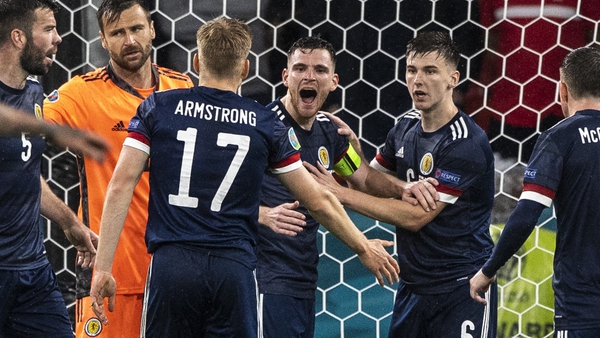