England were held to a goalless draw by Scotland as Steve Clarke's well-drilled side gave their hopes of reaching the Euro 2020 knockout phase a much-needed shot in the arm.

International football’s oldest rivals locked horns for the 115th time in Friday’s eagerly-anticipated Group D clash at Wembley, where the crackling atmosphere belied the restricted attendance under the arch.

England knew victory against their fierce foes would seal progress to the round of 16 with a match to spare, but Scotland dug deep and gave Gareth Southgate’s side a few scares as they sealed a deserved draw.

Having ended their 23-year absence from major tournaments with an underwhelming loss to the Czech Republic on Monday, Clarke’s men would have been in a perilous position had they lost to the Three Lions.

But the wounded Scots rallied well in London, where Stephen O’Donnell saw an excellent volley met by an equally impressive save by Jordan Pickford in a first half that started with John Stones rattling the woodwork.

England failed to muster a shot on target during the opening period and did not improve much after the break, with Southgate eventually substituting captain Harry Kane against a Scotland side who pushed until the end.

Lyndon Dykes saw the visitors’ best effort of an impressive second half effort cleared off the line by Reece James on a dank evening that saw the Tartan Army celebrate at full-time as their England counterparts booed.

But should England have had a penalty here?#EURO2020 #RTESoccer #ENGSCO #SCO

An incredible din welcomed the sides out at Wembley, where fans took turns booing one another's national anthem before joining in a powerful show of unity by applauding loudly as both sides took the knee.

Scotland made four alterations from the 2-0 defeat to the Czechs, with Che Adams among those brought in and seeing an early snapshot blocked.

Clarke’s visitors looked up for the battle but were so close to the worst possible start. Having seen a curling effort deflected wide, Mason Mount swung in the resulting corner and unmarked Stones rose to send a header crashing off the right post in the 11th minute.

Scotland were breathing a sigh of relief once again moments later. Scott McTominay, the Manchester United midfielder deployed in the visitors’ back three, was robbed of possession by Raheem Sterling, who played in for Mount to poke wide.

Battling midfielder John McGinn looked perplexed after being handed the first booking of the evening for dissent in the 15th minute, with Phil Foden and Kane missing the target before the flag went up against them both.

But England were struggling to break down Scotland and had Pickford to thank for rescuing them on the half-hour mark.

Andy Robertson played onto overlapping Kieran Tierney, who cut inside and clipped a cross to the far post for O’Donnell to hit a fine volley denied by a one-handed stop.

It was a huge chance for a Scotland side who had now settled, with full debutant Billy Gilmour shining in midfield.

England returned from half-time strongly as Luke Shaw and Sterling saw threatening crosses cut out before Mount forced a first save of the evening out of David Marshall.

James flashed over after a spell of patient England possession, with Grant Hanley throwing himself in front of a Kane shot after Dykes and Adams failed to make a nervy moment for the hosts’ backline count.

Dykes was then a goal-line clearance away from sending the Tartan Army into raptures. Robertson drove in a corner from the right and the ball fell for the QPR striker to strike an effort that was heading close to the top-left hand corner until James got back to clear.

There was a mixed reaction to Southgate taking off Foden as Jack Grealish was introduced to a huge roar, with the playmaker quickly showing some nice touches.

Shaw lashed across the face of goal before Adams did the same from an acute angle at the other end as the match entered a tense closing stage.

Sterling was annoyed to see penalty claims against Robertson rejected, while there was a frantic, late penalty box melee that Scotland survived as they sealed a point. 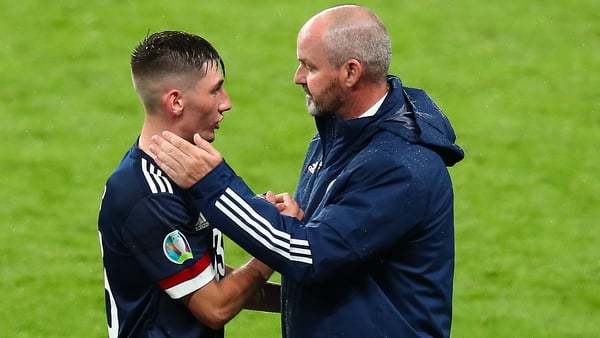