Captain Eden Hazard inspired Belgium to a resounding 4-0 victory over Hungary at Euro 2016, setting up a quarter-final clash with Wales.

Toby Alderweireld set up victory with an early header before the brilliant Eden Hazard teed-up substitute Michy Batshuayi for the second after 78 minutes and then scored a superb solo goal himself.

Yannick Carrasco wrapped up victory in Toulouse in injury-time.

After some disjointed performances earlier in the tournament, this was a display that marked out the highly-rated Belgium as serious contenders in France.

Hungary did trouble them in spells, but they were generally outclassed.

Belgium went straight onto the offensive with the impressive Kevin de Bruyne, revelling in a central role behind Romelu Lukaku, shooting wide after four minutes.

De Bruyne linked superbly with Lukaku throughout and the Everton striker twice went close early on after being played in by the Manchester City man.

Hungary goalkeeper Gabor Kiraly kept out one of them and he also blocked another De Bruyne shot before the opener came.

Again De Bruyne was the key figure, swinging in a curling free-kick that Alderweireld rose above Lukaku to head powerfully past Kiraly.

Hungary tried to tighten up and they did launch some sporadic attacks, with Balasz Dzsudzsak getting in one shot at Thibaut Courtois, but Belgium remained on the front foot.

De Bruyne headed at Kiraly from a Lukaku cross and then forced a brilliant save from Kiraly from a free-kick, with the former Crystal Palace goalkeeper tipping onto the crossbar.

The wider forwards, Hazard and Dries Mertens, were also heavily involved in the attacks and the former teed-up the latter but again Kiraly produced a good save. 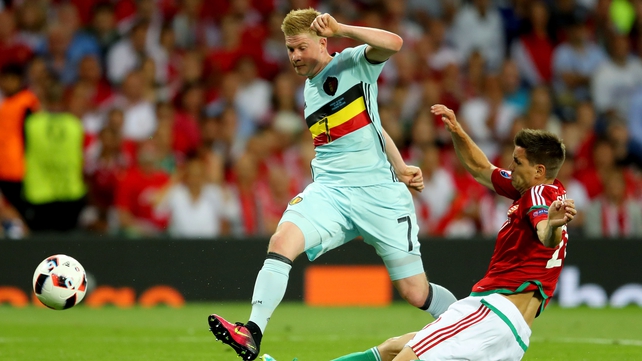 Belgium were almost caught out when Gergo Lovrenesics thundered a fierce drive just over but normal service seemed to be resumed when Hazard tested Kiraly after a powerful run straight after the break.

But Hungary, summoning the spirit of their dramatic 3-3 draw with Portugal, fought back and worried Belgium for a spell.

Adam Szalai shot over and Courtois needed to back-pedal to push over a deflected effort from Adam Pinter.

Roland Juhasz then twice went close as he flashed a low shot across goal after a free-kick found its way to him on the right and he headed a corner wide.

Belgium decided to send on Batshuayi for Lukaku and it paid instant dividends, although his goal owed much to the brilliance of Hazard.

Hazard lost his man on the left with a superb change of pace and his low ball into the box presented Batshuayi with an unmissable chance in front of goal.

Hazard was not finished there and went even better two minutes later, easing past defenders as he cut in from the left and then curled a low shot inside the far post from 18 yards.

In those two moments the game was won and Hazard was taken off to a huge ovation shortly afterwards.

Hungary might have had a consolation in the last minute but Courtois saved from Akos Elek and Belgium broke upfield to score again with Carrasco racing on to a Radja Nainggolan pass to tuck home the fourth.