Gareth McAuley put the ball into the back of his own net as Northern Ireland were knocked out of Euro 2016, losing 1-0 to Wales at Parc des Princes in Paris.

Michael O’Neill’s side took the game to their near-neighbours and spoiled their passing game, keeping Real Madrid’s Gareth Bale quiet for the opening half.

But sure enough, it was Bale’s precise and powerful cross from the left in the 75th minute that set up the deciding goal as a stretching McAuley could only poke the ball into the back of his own net.

It was a full house in the Paris sunshine, with the PSG stadium awash with green and red at either end of the ground.

Northern Ireland started the game at a great pace, while Wales had kept their composure throughout the opening exchanges as they attempted to take the derby atmosphere out of the game, happy to hold onto the ball, waiting for gaps.

Eventually, in the ninth minute Gareth Bale set off on a run down the right wing but was crowded out and had to turn inside.

Northern Ireland held a strong line and broke down the play, as Steven Davis and Corry Evans burst out of midfield and worked the ball out to Ward on the right flank.

The ball was squared and eventually found the incoming Stuart Dallas but his shot was well saved by Wayne Hennessey in the Wales goal.

Wales almost got in on goal three minutes later as a clever ball was whipped in from the right but Aaron Ramsey was not able to make contact with his flicked attempt.

Chris Coleman’s side did have the ball in the back of the net in the 19th minute but Ramsey had strayed offside before latching onto Sam Vokes’ towering header.

Northern Ireland kept up their impressive tempo, with Davis in the middle of the park looking really composed, bringing others into play.

That neat and tidy play led to another attempt on goal in the 22nd minute as Ward cut in on from the right and forced Hennessey to make another save, this time tipping over the bar.

Three minutes later, Lafferty won an aerial battle on the edge of the box as he connected with a long ball out of defence by Jonny Evans, but his looping header dropped over the bar.

And despite Wales looking more comfortable on the ball, star man Bale was finding little room to manoeuvre as he drifted from the right flank to the left looking to get on the ball but he could find no way through that line of centre halves across the Northern Ireland box.

Wales just could not get their passing game working inside the Northern Ireland half with a real disciplined defensive performance thwarting any danger. 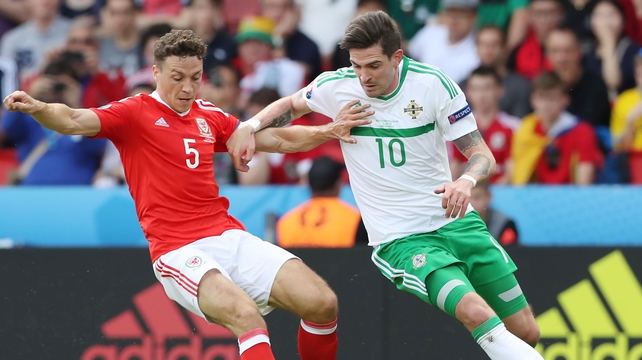 And it was the North who again pushed forward, this time Aaron Hughes working well with Ward before bursting down the right to work a tremendous cross across the six-yard box. The pace on the ball beat everyone, however, and Wales cleared their lines.

Bale briefly came to life just before the break as he skipped past a couple of challenges out on the right flank but his hopeful cross into the box proved easy to deal with as the referee brought the first half to a close with Northern Ireland certainly the happier with their first-half showing.

O’Neill’s side took up where they left off at the start of the second half causing all sorts of problems for the Wales back three who looked very uncomfortable under pressure.

But Wales nearly grabbed an opening goal, out of nothing, as Ramsey picked the ball up on the right flank and pinged an early ball into the box right on the head of the unmarked Sam Vokes, but the big Burnley man’s downward header bounced the wrong side of the post.

And then in the 57th minute, Wales got what they were looking for; a free-kick within distance.

Bale was taken out by Oliver Norwood about five yards outside the box on the right hand side and the Madrid man dusted himself down, took four steps back and two to the side and locked in his target.

This routine had brought success already for Bale at this tournament with goals against Slovakia and England. The left-footed effort cleared the wall and appeared to dip just as it reached the goal but McGovern was equal to the task and batted the ball away.

Two Wales substitutions were sent on with Hal Robson-Kanu and Jonathan Williams bringing some real energy to this sluggish Welsh performance. And it had the desired effect as Coleman’s side started to take control over a visibly tiring Northern Ireland.

O’Neill sensed that his side were feeling the pressure and also made a change bringing Conor Washington on for the jaded-looking Ward who had worked tirelessly throughout.

The breakthrough came with 15 minutes remaining and it was the red sections that were celebrating as Wales took the lead.

Ramsey was looking to work the ball in from the edge of the box before turning out and laying the ball off to Bale on the left flank.

The Real Madrid man slammed the ball across the edge of the six-yard box and McAuley could only divert the ball into the back of his own net, as Robson-Kanu was arriving behind the West Brom defender. 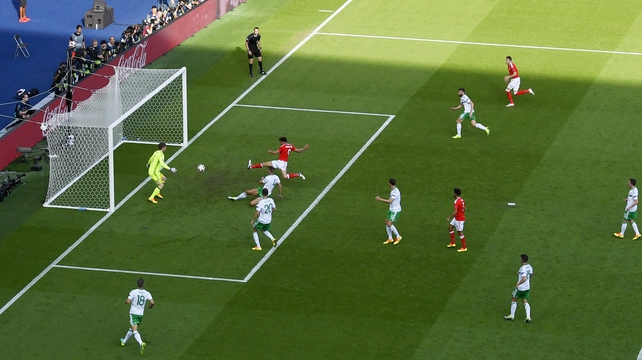 O’Neill had to take chances now and sent former Derry City midfielder Niall McGinn into the fray in place of Norwood.

Northern Ireland had ten minutes to save their tournament. O’Neill then went with three at the back to send Josh Magennis on in place of McAuley.

The former Shamrock Rovers manager was livid on the sideline.

Sure enough, the game rolled past the 90-minute mark with just four additional minutes for Wales to hold on for a place in the last-eight.

The fatigued Northern Ireland side never troubled them and bow out of the tournament, while Wales go on to face the winners of Hungary and Belgium.