Switzerland's Granit Xhaka won the battle of the brothers as Albania's debut at a major tournament ended in a 1-0 defeat.

The new Arsenal midfielder was up against his brother Taulant in the opposition ranks, the first time two siblings have faced each other in European Championship history, but it was the younger of the two who came out on top in the Group A clash.

Albania's nerves were understandable but goalkeeper Etrit Berisha's decision to come for a fifth-minute corner was misguided at best as he completely missed Xherdan Shaqiri's cross, allowing Fabian Schar to head home.

The tournament newcomers continued to shoot themselves in the foot, however, and captain Lorik Cana's sending-off off for a second bookable offence 10 minutes before half-time killed all the momentum built up after overcoming their initial anxiety.

Berisha went on to redeem himself with a number of good saves but the early damage could not be repaired, although it was not for the lack of effort as the well-supported Albanians made light of their numerical disadvantage with a gutsy display.

An affinity between the two nations was well-established off the pitch a long time before they met on it as Switzerland accepted thousands of Kosovar Albanians fleeing the Balkan wars in the 1990s following the break-up of the former Yugoslavia.

The Xhaka brothers - whose parents were part of that migration - are the embodiment of that, with Taulant switching allegiance to Albania having played for Switzerland Under-21s. 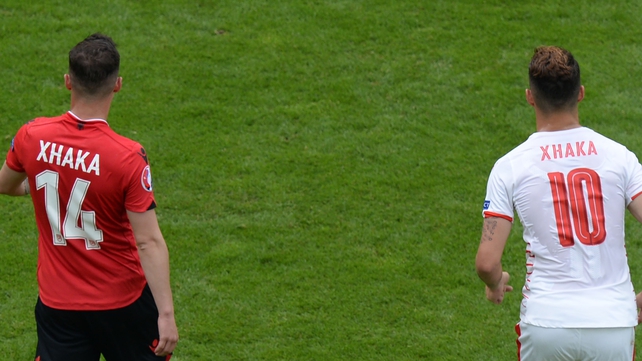 However, the match started with all 10 midfielders on the pitch of Albanian descent.

Granit may have won the individual duel with his brother, who was substituted just past the hour, but it was Schar who was the unlikely match-winner.

The Hoffenheim defender comfortably beat Berisha to Shaqiri's corner to leave the Albania goalkeeper somewhat embarrassed as the ball flew into an unguarded net.

Haris Seferovic should have doubled the lead 10 minutes later but shot straight at Berisha, who was to prove something of a personal nemesis for the remainder of the game, from Blerim Dzemaili's lay-off. 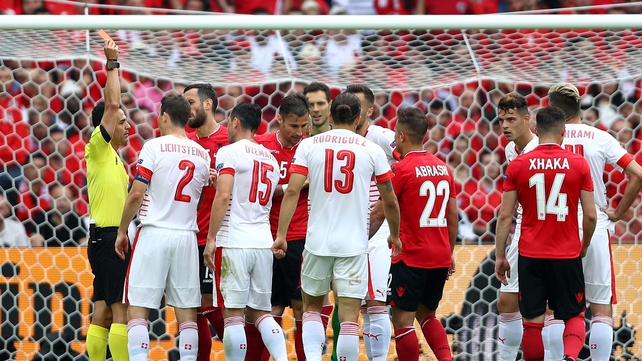 Cana, who was booked for going through the back of Dzemaili, then got caught out by a long ball forward and in the race with Seferovic to retrieve the situation he slipped on the edge of the penalty area and, realising the striker would be clean through, handled the ball away.

Dzemaili drilled the low free-kick against the base of the post as Switzerland seized back the initiative after Taulent Xhaka had fired wide and Yann Sommer saved well after Armando Sadiku had timed his sprint perfectly to run in behind the Swiss defence to collect Elseid Hysaj's brilliant raking pass.

Dzemaili flashed a first-time shot wide before Seferovic's angled shot was parried by Berisha, who then denied the Swiss striker on two more occasions after the break.

While Switzerland dominated possession Albania continued to pose a sporadic threat with Sadiku firing into the side-netting and Lenjani unsuccessfully appealing for a penalty after tangling with right-back Stephan Lichtsteiner.

But their best chance came three minutes from time when substitute Shkelzen Gashi was played clean through but shot too close to Sommer who tipped over.