Spain goalkeeper David de Gea has strongly denied claims that he was involved in arranging a sexual encounter for other footballers at which two girls were allegedly sexually abused, and pledged to stay focused on helping his team-mates win Euro 2016.

The Manchester United shot-stopper, rated as one of the best keepers in the world, was named by a protected witness in an ongoing case in his homeland, in which a woman claims she was sexually assaulted by a number footballers in 2012.

Spanish police are investigating the allegations, but De Gea told a press conference: "I'm more surprised than anyone by this news. I want to deny it. It is a lie and a falsehood.

"It gives me more reason to stay with Spain, in the company of my team-mates. It's in the hands of my lawyers.

"I'm very calm. I'm just looking forward to going out to train and enjoying myself," he added at the press conference, which was broadcast live on Periscope.

"I've no idea where this has come from. I know it's all false. We have to move on."

The woman's statement was made in connection with a rape case involving a pornography producer known as Torbe, who also faces charges ranging from sex trafficking and prostitution to extortion.

The El Diario newspaper in Spain reported that De Gea was not accused of being involved in the alleged assault but was claimed to have organised the meeting between the footballers, one of whom has been named as Athletic Bilbao forward Iker Muniain, and two women.

Some initial reports suggested the 25-year-old had been sent home from Euro 2016 but he has remained with the squad in France.

A statement on his official Twitter account read: "Following the reports published today about myself I want to state:
1 - That the claims made are absolutely false.
2 - That in the coming days I will appoint a lawyer to defend my honour.
3 - I hope that those fans who have supported me on the field will trust in me at this time." 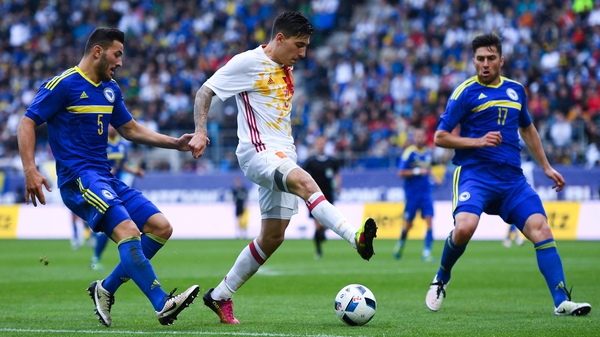