Martin O'Neill has extended his contract as Republic of Ireland manager until the conclusion of the 2018 World Cup campaign, the FAI have announced.

O’Neill said he was “delighted” to commit his future to the Ireland team, on the eve of the squad’s departure for Euro 2016. Ireland begin their Group E campaign in France against Sweden in Paris on Monday.

“I am delighted that John Delaney and the FAI Board have extended our contracts for the World Cup campaign,” said O’Neill.

“It has been an absolute privilege to have been in charge of the Republic of Ireland national team, these last 30 months, and we go to France tomorrow in good spirits, with a strong desire to do well in the next few weeks.

“The players have done brilliantly in the campaign so far and they are ready for the big challenges ahead.”

“I am delighted we have agreed terms with Martin and his team of Roy Keane, Steve Guppy, Seamus McDonagh and Steve Walford,” said Delaney.

“The board of the FAI were unanimous in offering Martin and his full management team a renewal of their contracts. 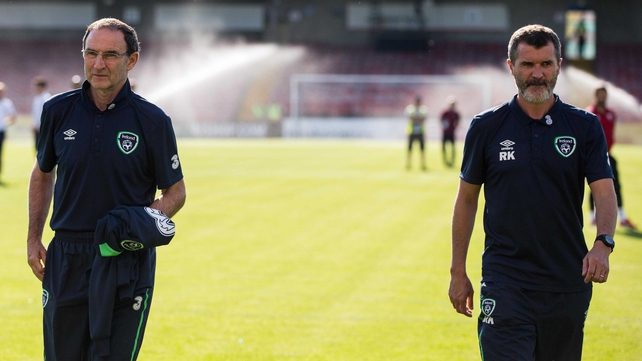 “Since Martin has taken over we have achieved the objective of qualifying for the EUROs and he has led the project in helping to develop some of the emerging talents in Irish football, including Robbie Brady and Shane Duffy, right up to the recent introduction of Callum O’Dowda, who made his senior debut last week.

“I am delighted to have worked with Martin and his team through qualification for the Euros, and I and all of the staff in the Association, look forward to working with them into the future.

“I would like to take this opportunity to wish the management team, the players and the backroom team the very best as we embark on our journey to France tomorrow for the European Championships.”

The former Northern Ireland international has led the Republic to a major tournament at his first attempt, beating Bosnia and Herzegovina in a play-off to secure qualification to Euro 2016.

O'Neill took over as manager in 2013 following the departure of Giovanni Trapattoni, whose side failed to reach the following year's World Cup.