Republic of Ireland captain Robbie Keane is doing all he can to get back to full fitness for Euro 2016 after more rehabilitation work with the squad in Cork today.

Martin O’Neill oversaw the final training session at Fota Island as the squad gear up for their European Championship opener against Sweden on 13 June and the LA Galaxy star was put through his paces by physio Tony McCarthy on the bike on Leeside.

Keane was included in O’Neill’s 23-man squad to travel to France despite currently being sidelined with a calf injury, though the player himself admitted that it is unlikely he will be fit for the opening game in Paris. 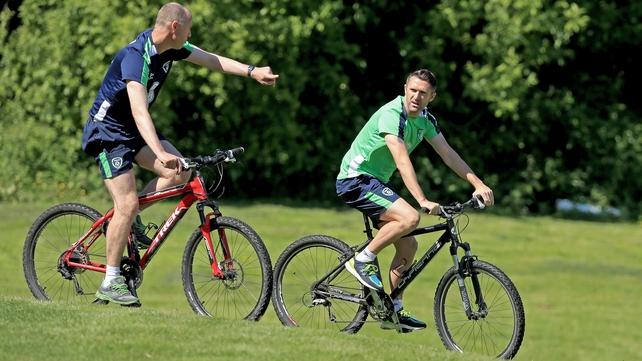 The former Liverpool and Tottenham Hotspur striker was preferred in place of Ipswich frontman David McGoldrick, and Ray Houghton believes that it’s the right decision to take Keane to what could be his international swansong.

Speaking to RTÉ Sport, Houghton said: “Obviously they’ve assessed it, there’s no use taking Robbie if he’s not going to be playing any minutes at all, it’s just a waste.”

The final session in Cork is underway! #COYBIG https://t.co/zz9y9sSrD3